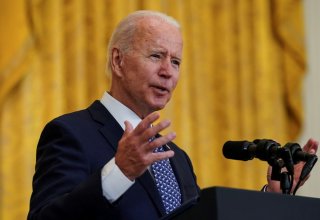 A long-awaited government report about the future solvency of Social Security was finally released last week, and it projected that the main trust fund that funds Social Security will become depleted in 2034, a year earlier than previously projected.

The Old-Age and Survivors Insurance and Disability Insurance Trust Fund is expected to hit that unfortunate milestone in just thirteen years. This would require benefits to be reduced at that time.

“The Trustees’ projections in this year’s report include the best estimates of the effects of the COVID-19 pandemic on the Social Security program,” Kilolo Kijakazi, Acting Commissioner of Social Security, said in a statement issued by Social Security Administration.

“The pandemic and its economic impact have had an effect on Social Security’s Trust Funds, and the future course of the pandemic is still uncertain. Yet, Social Security will continue to play a critical role in the lives of 65 million beneficiaries and 176 million workers and their families during 2021.”

However, it’s possible that that date could be staved off if Congress takes action. The Philadelphia Inquirer’s Joseph N. DiStefano wrote on Wednesday about how exactly how that could happen.

The forces causing the funds to dwindle, which include the pandemic and fewer people paying into the system, indicate that “Congress and the president may have to do something painful — raise Social Security taxes, or trim payments, hike the retirement age, or do all of these at once. Which they have, in the past: notably in 1983, when President Ronald Reagan joined the Democrats in a deal to boost contributions a little, and slowly raise the age for ‘normal’ retirement to the current 67, making the system more solvent, at least until that generation of Washington politicians was safely dead.”

Proposals, the writer says, include raising the retirement age to 69, cutting the yearly increases to Social Security, and “boosting” payroll taxes. DiStefano also noted that two Senators, Joe Manchin (D-WV) and Mitt Romney (R-UT) have “called for a national Social Security fix-it commission of experts” to study the issue and make recommendations.

“The longer we wait, the less money the program will have left. Wait until it’s about to go broke, and the cuts will have to be a lot larger, or the bailout a lot more expensive, or we’ll have to repeat it very frequently,” the op-ed says. “Can’t we just borrow the money? That might be a way out. But the system is currently barred from deficit funding. To change that would undo another of the guiding and popular principles of the system — that it is a pay-as-you-go system, not welfare, but one in which people earned their payments.”