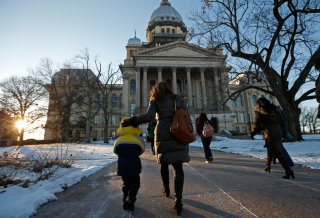 The expanded child tax credit—part of the American Rescue Plan Act—led to a larger tax credit and direct payments for American families for the last six months of 2021. The credit, however, expired at the end of 2021, and last-ditch efforts to expand it by another year failed in the Senate in late 2021. As a result, families this year have had to make do without those monthly checks.

Just this year, several states have passed or considered passing their own child tax credits, including Alabama and New Mexico. The latest state trying to do something similar is Illinois, the Center Square reported.

A pair of bills in the Illinois legislature would serve to expand the earned income credit (EIC) and create a state-level child tax credit (CTC). The state does not currently offer its own child tax credit. “This has been proven to affect poverty,” said Rep. Carol Ammons, a sponsor of HB4920. “This is an anti-poverty policy that we know works and gives people direct relief.”

According to the politicians, the legislation would make 1.2 million more people in the state eligible for the earned income credit and provide more financial support to 3.6 million people.

“It really is putting money back in workers’ pockets, so it is boosting their earnings so that they are able to spend that in the economy,” said Allison Flanagan, associate director of Budget and Policy for the Center for Tax and Budget Accountability, said in the announcement. “You get sort of this duplicative effect. It is helping the household and those households are going and spending the money.”

A letter to the editor of the Chicago Sun-Times this week showed how people in Illinois are struggling without the federal child tax credit payments. “Families like mine were fortunate that the child tax credit was distributed monthly last year, to offset rising prices. However, the end of these payments in January disrupted the finances of families everywhere,” Colyn Belknap wrote in the letter. “The disruption could easily be solved by legislators if they’re willing to compromise on the credit.”

Columbia’s Center on Poverty and Social Policy issued a report last month showing that 3.7 million more children were in poverty in January of this year, the first month after the expiration of the expanded child tax credit. That metric had dropped by a similar amount during the first month that the credit was in place last year.