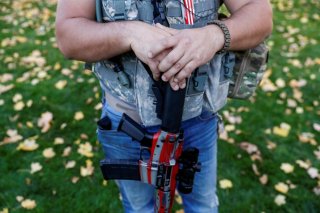 For more than a year, the Internal Revenue Service (IRS) pushed for additional funding, in order to deal with its considerable backlog of unprocessed returns and replace employees who have retired or plan to in the next few years.

With the passage earlier this month of the Inflation Reduction Act, the IRS got the $80 billion in funding it wanted. But the subsequent arrival of a dubious talking point about “an army” of “87,000 armed IRS agents” has led to widespread anger at the agency- as well as plenty of threats.

According to the Washington Post, the IRS has announced a “full security review” of its offices and facilities, due to recent threats.

“We see what’s out there in terms of social media. Our workforce is concerned about their safety,” Charles Rettig, the IRS commissioner told the Washington Post. “The comments being made are extremely disrespectful to the agency, to the employees and to the country.”

The last time the IRS conducted such a review was following the Oklahoma City bombing in 1995 when a federal building was attacked and 168 people killed.

“For me this is personal,” Rettig wrote in the letter to IRS employees. “I’ll continue to make every effort to dispel any lingering misperceptions about our work. And I will continue to advocate for your safety in every venue where I have an audience. You go above and beyond every single day, and I am honored to work with each of you.”

Per Politifact, one video making the rounds claims that "the IRS is about to double in size, with 87,000 new armed agents and an additional $80 billion in order to primarily enhance IRS enforcement and operations.”

However, that is very far from true. The 87,000 figure comes from a 2021 Treasury Department study estimating how many people the IRS could hire with the new funding, but the new hires would not all be agents, most of them would not be armed, and 87,000 people would be hired would be over a ten-year period.

And many of those hires would replace others who have retired or will retire. Per Politifact, within the IRS “half the current staff is close to retirement and about 50,000 are expected to leave in the next six years.”

It’s also not true that the IRS has a “stockpile” of weapons.

Sen. Rick Scott wrote a letter this month actually discouraging job seekers from going to work for the IRS.

“These new positions at the IRS will not offer you the long-term job stability you may expect from a position with the federal government. Put another way: this will be a short-term gig,” Scott said. “Republicans will take over the House and Senate in January, and I can promise you that we will immediately do everything in our power to defund this insane and unwarranted expansion of government into the lives of the American people.”