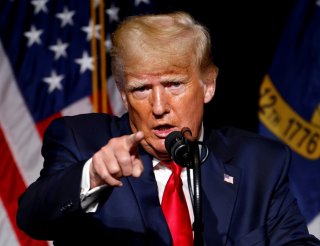 Evan Neumann, a California man wanted by the U.S. government for his participation in the January 6 Capitol riot, has surfaced halfway around the world—in Belarus, where he is seeking political asylum.

The Belarusian state-run “Belarus 1” TV channel broadcast an interview with Neumann, where he indicated he was being persecuted by the federal government for his political views.

Belarus has experienced tensions with the United States following its August 2020 election, in which Belarusian leader Alexander Lukashenko was officially re-elected to a sixth term in office. Belarusian and international observers widely condemned the election as overtly fraudulent, spawning a year-long but ultimately unsuccessful protest movement.

Given Belarus’s image problem, the Belarus 1 network appeared happy to present the country as a beacon of sanctuary for political dissidents. It described Neumann as an “ordinary American [...] whose stores were burned by representatives of the [Black Lives Matter] movement,” echoing a common Russian refrain emphasizing rioting during the George Floyd protests in the summer of 2020.

According to the network, Neumann “sought justice” and “asked uncomfortable questions,” but “lost almost everything and is persecuted by the U.S. government.” It compared him to Edward Snowden, another famous fugitive from the U.S. justice system, and although it noted that he had never had access to state secrets as Snowden had, it emphasized that both men had fled the United States, which it sarcastically derided as “the land of fabulous freedoms and opportunities.”

In an interview with the network, Neumann claimed that he had been subjected to “political persecution,” accusing the government of deliberately setting up protesters and entrapping them into committing criminal activity.

The FBI has charged Neumann with six crimes related to the events of January 6, including using force against Capitol police officers prior to entering the building. Neumann remained in the Capitol building for roughly four hours.

After the FBI charged him, Neumann sold his house and left the United States, ostensibly on a work trip for his bag manufacturing business. He flew to Italy, then traveled to Switzerland, Germany, Poland, and Ukraine, where he remained for four months.

Following his suspicions that the Ukrainian police were watching him, Neumann left for the Belarusian border, illegally entering the country and applying for asylum after being detained.

The TV program featuring Neumann’s story, titled “Goodbye America,” will air within Belarus on the evening of November 10.