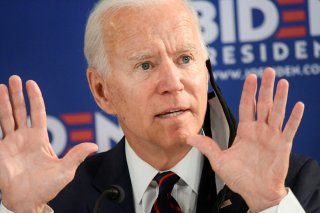 Did you hear that the Biden Administration, as part of their effort to combat climate change by slashing emissions, is seeking to limit Americans’ meat consumption, to as few as one hamburger a month?

In recent days, there have been headlines like “Biden Climate Pledge Could Limit Americans to One Burger a MONTH, Hike Taxes and Force You to Spend $55k on Electric Car” and “Biden’s Green New Deal Means No Meat for the 4th of July, Have Grilled Brussels Sprouts Instead” and “ONE BURGER A MONTH? Would Biden’s Climate Plan Reduce Red Meat by 90 Percent?”

Various conservative influencers have posted pictures of giant burgers and steaks, along with claims like “Biden says we can have four pounds of red meat per year.” Even a member of Congress, Rep. Lauren Boebert of Colorado, tweeted “Joe Biden’s climate plan includes cutting 90% of red meat from our diets by 2030. They want to limit us to about four pounds a year. Why doesn’t Joe stay out of my kitchen?”

None of this is true. President Biden and his administration have not proposed mandating that Americans limit their meat consumption. Nothing even closely resembling that proposal has been put forward by the administration.

Here’s what did happen: Last week, at a climate summit coinciding with Earth Day, the president announced a plan to cut emissions by 2030, and to reach net-zero emissions by 2050.

“On the first day of the summit, President Biden upped the ante,” the White House website said of Biden’s actions during last week’s climate summit. “He announced the United States will target reducing emissions by 50-52 percent by 2030 compared to 2005 levels. He underscored America’s commitment to leading a clean energy revolution and creating good-paying, union jobs—noting that the countries that take decisive action now will reap the economic benefits of the future.”

The White House announcement included several specific initiatives, including the launch of a Global Climate Ambition Initiative, the launch of a Greening Government initiative, increasing financing to other countries in assisting their climate goals, and pushing alternative energy.

Not included in this long announcement, however, is any reference to forcing Americans to limit their meat consumption, or any reference to meat at all. And while the proposal includes the country’s plans to “join a coalition of governments representing more than half of new vehicle sales globally that is dedicated to accelerating the global transition to zero emission vehicles,” there’s nothing about plans to force all Americans to buy electric cars.

The claims about meat appear to come from a Daily Mail article, published on April 22. The headline is “How Biden’s climate plan could limit you to eat just one burger a MONTH, cost $3.5K a year per person in taxes, force you to spend $55K on an electric car and ‘crush’ American jobs.”

The word “could” is doing a lot of work there.

The reasoning is this: the Biden Administration has proposed a cut in greenhouse emissions by 2030. The Daily Mail then pivots to a study by “Michigan University’s Center for Sustainable Systems” (the institution is actually called The University of Michigan.)

The study, according to the Mail, shows that reaching that goal would mean that “Americans may have to cut their red meat consumption by a whopping 90 percent and cut their consumption of other animal based foods in half.” Doing so would “require Americans to only consume about four pounds of red meat per year, or 0.18 ounces per day.”

The Mail goes on to say that to reach that goal, “more than half of new cars bought in the United States would need to be electric within the next decade,” and that the average price of such a car is currently $55,000. But it’s virtually certain that the market share of electric cars will grow over time, and nearly as certain that their price will go down as time passes as well.

The Daily Mail story goes on to quote a representative from an organization called the Taxpayers Protection Alliance, as well as Bjorn Lomborg, the author of a book called The Skeptic Environmentalist.

The Michigan and Maryland studies are estimates. But more importantly, they’re completely separate from what the Biden Administration has actually proposed. Through a dishonest game of telephone, those alleged restrictions on meat, and supposed plans to require electric cars or significantly raise taxes, have been conflated with what the administration is actually proposing.

This is something of a rehash of the fight that was had back in 2019, when a group of members of Congress led by Rep. Alexandria Ocasio-Cortez introduced an initiative called the Green New Deal, which had the goal of making the U.S. carbon-neutral by 2030 and stimulating the economy through green jobs and energy.

While that bill did not directly mandate anything related to meat consumption, Ocasio-Cortez did make some comments in an interview, per Eater.

“It’s not to say you get rid of agriculture. It’s not to say we’re going to force everybody to go vegan or anything crazy like that,” the Congresswoman said on Showtime’s Desus and Mero. “But it’s to say, listen, we’ve got to address factory farming. Maybe we shouldn’t be eating a hamburger for breakfast, lunch and dinner. Like, let’s keep it real… We set a goal to get to net-zero, rather than zero, emissions in 10 years because we aren’t sure that we’ll be able to fully get rid of farting cows and airplanes that fast.”

This led to some amount of fearmongering that AOC and others supportive of the Green New Deal wanted to “get rid of hamburgers.”

But “address factory farming” isn’t the same thing as banning or even curtailing meat consumption. Also, the Green New Deal never became law, and Biden’s climate proposals are not the same as the 2017 version of that legislation.

So, relax: your burger and steak are safe.