Joe Biden's Next Problem: The Fed Is Thinking About Raising Interest Rates 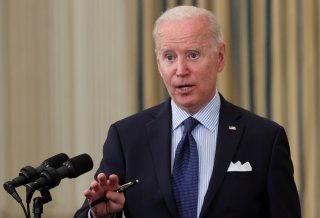 Federal Reserve officials noted Wednesday that they anticipate an interest rate hike by late 2023, a large departure from their estimates in March, as the U.S. economy recovers from the coronavirus pandemic.

Officials signaled their near-zero benchmark interest rate could rise to 0.6 percent by the end of 2023, according to their median projection. In March, however, officials had predicted that the rates would remain steady during that year.

“This is not what the market expected,” James McCann, the deputy chief economist at Aberdeen Standard Investments, told CNBC. “The Fed is now signaling that rates will need to rise sooner and faster, with their forecast suggesting two hikes in 2023. This change in stance jars a little with the Fed’s recent claims that the recent spike in inflation is temporary.”

At a press conference this week following the central bank’s two-day monetary policymaking meeting, Federal Reserve Chairman Jerome Powell said that officials have also surfaced potentially scaling back its bond purchasing, though the timeline is unclear.

“This is an extraordinarily unusual time, and we really don't have a template or any experience in a situation like this,” Powell said at the news conference.

Fed officials also covered concerns about heated inflation in their post-meeting statement, lifting their projection that inflation will reach 3.4 percent, up from a one percent increase from projections in March.

Powell pointed to the high cost of lumber and used cars as factors driving up prices due to their sudden shortages amid the pandemic, which will “reverse over time.”

Another reason for price increases may be the widespread labor shortage, which has forced some employers to hike their wages to attract people to come back to work. Although the Fed could boost the interest rate to calm inflation, that would certainly have a negative effect on the labor market, according to CNBC, with businesses hiring new employees to lower costs.

The most recent jobs report also revealed an unemployment rate of 5.8 percent, up from pre-pandemic figures that hovered around 3.5 percent.

Powell has reiterated that he would give markets plenty of notice before it takes action to nix any crisis-era policy.

“We will do what we can to avoid a market reaction, but ultimately, when we achieve our macroeconomic goal, we will taper, as appropriate,” Powell said.