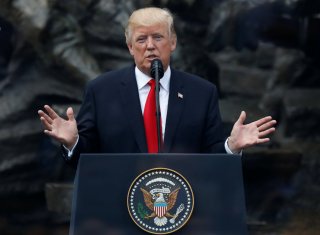 Shortly after the January 6th Capitol insurrection, former President Donald Trump was permanently banned from Twitter. While some had called for the then-president to be tossed from the social network sooner, Twitter had resisted doing so, until then.

“After close review of recent Tweets from the @realDonaldTrump account and the context around them—specifically how they are being received and interpreted on and off Twitter—we have permanently suspended the account due to the risk of further incitement of violence,” Twitter said in a blog post at the time.

The following July, Trump announced that he was suing Twitter, along with Google, Facebook, and the companies’ chief executives.

“We are demanding an end to the shadow-banning, a stop to the silencing, and a stop to the blacklisting, banishing, and canceling that you know so well," Trump said in the suit.

However, last week, the Twitter portion of that lawsuit was thrown out by a judge.

According to CNBC, San Francisco federal district court Judge James Donato dismissed Trump’s lawsuit, which had asked for the ex-president’s account to be reinstated. The judge, however, “left the door open for Trump and other plaintiffs to file an amended complaint against Twitter that is consistent with his written decision Friday to toss the lawsuit in its entirety.”

Trump, who has since launched his own social network known as Truth Social, said in a recent interview that he would not return to Twitter even in the event that his ban is lifted by the company.

Elon Musk, who has agreed to purchase Twitter, has vowed to embrace more of a free speech ethos upon taking over, although he has not specifically said that he plans to lift Trump’s banishment.

Trump’s use of Twitter contributed to his rise when he first ran for president in 2015, and he tweeted prolifically throughout most of his time in the White House. However, with Trump hinting that he may run again in 2024, he won’t have that tool at his disposal, barring a change of heart on the part of both himself and Twitter.

Truth Social, the network on which Trump only began using recently, has reportedly not earned an especially large audience.

At the same time, CNBC reported that Musk denied a recent claim by Devin Nunes, the former Republican lawmaker who is now CEO of Truth Social, that Trump had encouraged Musk to purchase Twitter.

“This is false,” Musk tweeted, to the claim by Nunes that “President Trump, basically before Elon Musk bought it, actually said to go and buy it.”