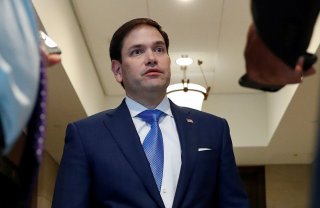 Sen. Marco Rubio (R-Fla.) lambasted President-elect Joe Biden’s foreign affairs-related cabinet picks on Tuesday, as he dubbed them as “caretakers of America’s decline,” hinting he might oppose their confirmations and signaling a potential broader battle for the president-elect in the event of a GOP-controlled Senate.

Rubio took to Twitter to address Biden’s nominees and acknowledged that while they “went to Ivy League schools” and “have strong resumes,” the picks “will be polite & orderly caretakers of America’s decline.”

“I support American greatness,” Rubio added. “And I have no interest in returning to the ‘normal’ that left us dependent on China.”

The senator’s sharp criticism comes after Biden released a slew of Cabinet nominees and announcements, including longtime confidant and veteran foreign policy official Antony Blinken as secretary of state and former assistant secretary of state Linda Thomas-Greenfield as ambassador to the United Nations—two positions that require Senate confirmation.

Biden also announced Jake Sullivan, a veteran of former President Barack Obama’s administration, as national security adviser, a cabinet post that does not need approval from the upper chamber.

“The Senator is sending both a political message and a policy message,” Kevin R. Kosar, a resident scholar at the American Enterprise Institute, said, referring to Rubio. “First, he is using Biden’s announcement of the nominees to underscore his recent remarks that the Republican party needs to be seen as a working class. Hence his jab about the nominees having gone to Ivy League schools. This is a political message directed to his fellow Republicans and others on the political right.”

In recent weeks, Rubio propped himself as a leader in the party’s transition towards representing and welcoming working-class Americans.

Kosar also said that Rubio’s “policy message” to the incoming administration pertains to “America’s role in international affairs.” Rubio, a member of both the Senate Foreign Relations and Intelligence committees, has been a longtime advocate of foreign policy issues, as well as the country’s relationship with China. Kosar speculated that the tweet “may amount to a request for a meeting” with Blinken and Thomas-Greenfield.

“Foreign policy is too complex to be discussed in 280-word social media bursts,” Kosar said.

John Feehery, a Republican strategist and columnist at The Hill, noted that Biden’s nominees deserve a “fair hearing with a full airing of their philosophy, their experience and their qualifications. I don’t think it matters what Republicans want because they didn’t win the White House.” But if Biden’s nominations are “people who will plunge America back into stupid wars, terrible trade agreements or treaties that will hurt our economy,” Feehery said, then Republicans have the “duty” to vote against their confirmation.

The president-elect hasn’t announced the defense secretary, a cabinet post who will lead the national security team in a Biden presidency, although Michèle Flournoy is rumored to be at the top of his shortlist. Other potential contenders are Jeh Johnson, former homeland security secretary under Obama’s administration and former lawyer in the Pentagon, and William McRaven, a retired Navy admiral.