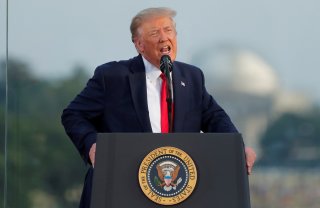 Meadows’ “sneak preview” of the upcoming orders involve actions that’ll get done when “Congress does not act.”

Meadows, a former North Carolina congressman, said to “stay tuned” and that “this president will do more in the next four weeks than Joe Biden and his team did in the last 40 years.”

The chief of staff also made remarks about the rising tensions with China as the U.S. shows force in the South China Sea.

“The message is clear, we’re not going to stand by and let China or anyone else take the reins in terms of being the most powerful, dominant force whether it’s in that region or over here,” Meadows said.

“Our mission is to make sure that the world knows that we still have the preeminent fighting force on the face of the globe. This president has invested more in our military, more in not only the hardware but the men and women who serve so sacrificially each and everyday,” Meadows said.

Meadows made the announcement as the number of coronavirus cases in the U.S. surpassed 2.8 million on Monday. He mentioned Trump’s approach to handling the spread of the virus as a “personal lifestyle” change “because help is on the way.”

He continued to say that the change is “temporary” as federal spending has been allocated to focus on vaccines to curb the spread of the virus.

“This president authorized tens of billions of dollars to make sure that we have a vaccine,” Meadows said. “Not a month early, not six months early, but a year earlier than most would say that it’s even possible. He’s willing to invest to make sure that whatever adjustment we have to make in our lifestyle is temporary.”

Around 32 states saw a spike in coronavirus cases this week in comparison to last week, according to Johns Hopkins University data, including Arizona, California, Florida, Maryland and Texas. Only four states experienced a decrease in new cases: Connecticut, Kentucky, Massachusetts and New Hampshire.

Despite the increase in cases, Meadows promised schools will open this fall. He echoed that the Administration has “plans to do just that.”

Rachel Bucchino is a reporter for the National Interest.