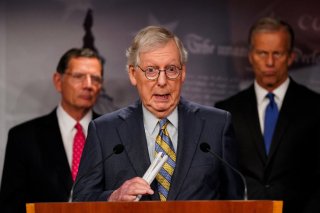 Senate Minority Leader Mitch McConnell (R-KY) stated on Monday that there is “very little election fraud” and that he isn’t overly concerned about threats to democracy, Axios has reported.

Per NBC, when asked about Americans ranking threats to democracy higher than other issues like inflation, McConnell told reporters: “I do think it’s an important issue. There were those who were trying to prevent the orderly transfer of power for the first time in American history,” after the 2020 presidential election, “and that was not good.

“But look, I think we have a very solid democracy. I don’t think of the things that we need to worry about, I wouldn’t be worried about that one,” he continued.

Meanwhile, per The Hill, Trump ramped up his feud with McConnell by calling him a “broken down hack politician.” He also took aim at former Transportation Secretary Elaine Chao, whom he labeled as a “crazy wife.”

“This is such an affront to honor and to leadership. He should spend more time (and money!) helping them get elected, and less time helping his crazy wife and family get rich on China!” he continued.

In Kentucky late last week, McConnell downplayed expectations of Republicans capturing control of the Senate in the midterm elections, citing “candidate quality” as a key factor.

“I think there’s probably a greater likelihood the House flips than the Senate. Senate races are just different—they're statewide, candidate quality has a lot to do with the outcome,” he said during a Northern Kentucky Chamber of Commerce luncheon, per NBC News.

According to FiveThirtyEight, Democrats are favored to win the Senate, 63 percent to 37 percent, while Republicans hold a sizable lead when it comes to the House, 79 percent to 21 percent.