Mike Pence: The Future of the Republican Party? 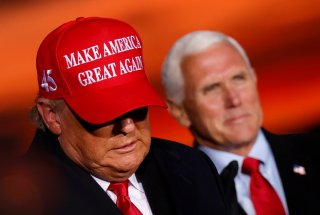 It all started with one of President Donald Trump’s most favorite pastimes -- golf.

Over the July 4 weekend, Mike Pence -- vice-presidential prospect at the time -- played a game of golf with the soon-to-be leader of the Republican party. That weekend initiated a promising four-year pledge of serving as Trump’s wingman and most “loyal soldier” that persisted even through a trio of crises -- the coronavirus pandemic, economic recession and a brutal re-election defeat.

Although the golf outing wasn’t the first time the two had met, it was the start of Trump’s vetting process for a strong running mate to beat then-presumptive Democratic nominee Hillary Clinton.

Shortly after, Pence has vouchsafed a top spot on the 2016 Republican ticket -- despite Trump thinking he was a bit of “a loser” in terms of politics -- and he has loyally supported the president’s decisions during the last four years, as well as on the campaign trail.

“He has been a loyal soldier to Trump and is a huge reason for much of his success. In fact, I think his debate with Kamala Harris was a resounding victory for the campaign and helped turn around the fortunes for the entire party,” John Feehery, Republican strategist and columnist at The Hill, says.

Pence’s most recent act of loyalty turns to him minorly backing Trump’s voter fraud allegations relating to the 2020 election results -- cases that have been widely discredited by law experts, as they lack concrete evidence. The vice-president has slightly upheld Trump’s legal blitz in several battleground states while also balking to fully defend it.

“As the votes continue to be counted, we’re going to remain vigilant, as the president said,” Pence said Wednesday morning after election night. “We’re going to protect the integrity of the vote.”

But for nearly a week, the vice-president has remained silent and out-of-the-spotlight, as he’s see-sawed between backing the president’s baseless claims while also maintaining a strong reputation on Capitol Hill and among the Republican party and future voters. His allegiance to Trump’s claims could harm his political candidacy in the future, especially if they are squashed and debunked by the judicial system.

According to The New York Times, Corey Lewandowski, a top Trump campaign adviser, requested that Pence travel to the Pennsylvania Convention Center last week where remaining votes are being counted and Trump-led lawsuits are brewing. Pence’s chief of staff, however, denied the request.

The vice-president did, however, convene with Trump in the Oval Office last week, as reported by the Times.

“There is little to be gained for Pence in taking a public position. He is perceived to back Trump by those who like Trump, and so he needn't be more vocal to retain that impression,” Gregory A. Huber, Forst Family professor of political science at Yale University, notes. “However, endorsing claims about fraud that now seem so clearly specious could be used against him if he chooses to run again.”

In recent months, rumors have swirled about Pence running for president in 2024, and as a recent GOP vice-president, he has a powerful chance at being the front-runner for the nomination. But as those speculations deepened, reports of Trump running for the commander-in-chief spot again in 2024 have sprouted since his election defeat against President-elect Joe Biden, potentially leaving Pence high and dry.

“If Trump pursues his plans to launch a 2024 campaign within the next six weeks Pence will find himself in the company of all GOP hopefuls whose future plans are now in jeopardy,” Ross Baker, professor of political science at Rutgers University, explains.

Chris Tausanovitch, assistant professor of political science at the University of California, Los Angeles, echoed Baker’s remarks, noting that Trump has become a “litmus test in the Republican party,” making it “very difficult for serious candidates to oppose him.”

“The prospect of a Trump run for President in 2024 bodes poorly for Pence's presidential ambitions. Support for Trump has emerged as a litmus test in the Republican party. This makes it very difficult for serious candidates to oppose him. Anyone who opposes him unsuccessfully risks becoming persona non grata in the Republican party,” Tausanovitch said.

Trump has developed his own faction within the party -- known as “Trumpism” -- that’s pushed him to be a GOP powerhouse for four years, as the group doesn’t blend with traditional Republican ideology. If Pence does run in 2024 and Trump does not, it’s unclear if the president will endorse him considering their colliding ideological beliefs.

Although Pence can embrace versions of Trumpism, candidates like Haley and Scott could convey it “in a more dynamic way than Pence, whose rhetorical style is as vanilla as his hair.”

“Pence’s dutiful, even slavish, adherence to Trump may be rewarded by a brush-back pitch by Trump and leave him sitting in the dugout with the also-rans,” Baker says.

Pence, former Indiana governor, perhaps should return to his roots of being a conservative radio show host in a post-Trump era with occasional golf outings, especially if the president tries to pull a Grover Cleveland and attempt to serve non-consecutive terms.

“If Trump runs, it is hard to see how Pence runs,” Feehery said. “Pence is a gifted communicator. He knows the world of talk radio and he knows how to stay on message.”

“Where he goes from here is anybody's guess,” Feehery added.