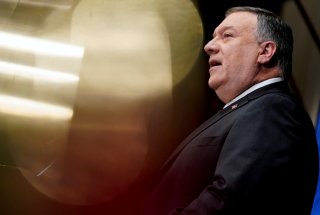 After being out of office for more than two months, former secretary of state Mike Pompeo has embraced the role of the political boxer, hurling verbal blows at President Joe Biden and his administration, as he tries to build noise within the GOP amid chatter of a 2024 presidential run.

In a slew of appearances in early presidential nominating states, as well as in interviews and Twitter posts, Pompeo has become one of the most vocal opponents of Biden’s agenda—mainly relating to the president’s foreign policy initiatives—critiques that have pushed him closer to centerfield in an already crowded 2024 Republican presidential primary, with speculated candidates waiting for former President Donald Trump to announce whether he’ll take a third crack at pursuing the White House.

“What’s great about not being the secretary of state anymore is I can say things that when I was a diplomat I couldn’t say,” Pompeo said last week to a small crowd near Des Moines, Iowa.

But Pompeo didn’t hesitate to “say things” that he “couldn’t say,” while serving as secretary of state, as he “routinely [threw] verbal punches against foreign governments, political opponents and the mainstream media,” according to reporters for The New York Times, reporters Lara Jakes and Michael Crowley. And now, Pompeo’s continued to unleash loads of criticism against his opponent, which is Biden and his administration, likely shaping up a 2024 presidential campaign that stands for reversing the president’s actions.

While current and former secretaries of state have navigated around being starkly partisan, experts aren’t too surprised that Pompeo has started knocking the Biden administration, as several politicians in that same position under previous administrations have attempted to pursue higher office.

“Mr. Pompeo is not the first secretary of state with national ambitions,” William Galston, a senior fellow in governance studies at the Brookings Institution, said. “But . . . what distinguishes him is two things: first of all . . . the extent to which he engaged in political activities as secretary of state, not as a former secretary of state, and secondly, his willingness to come out swinging against a new administration of the other party, very quickly.”

Galston added, “And it’s clear to me that . . . Mr. Pompeo is pursuing national ambitions enthusiastically and energetically, and is wasting no time.”

“[Secretaries of states] are political appointees and most have been active in party politics. Partisanship and agreement with the president’s views are major criteria for selection. Many [secretaries of states] were nominated for and held elected office prior to their appointment. Some view being [secretary of state] as a capstone to a political career. Others see it as a stepping stone for higher office,” Paul Herrnson, a political science professor at the University of Connecticut and a Fellow at the Center for Responsive Politics, said.

The former secretary of state also argued that the Biden administration caused the crisis at the southern border since the team reversed Trump’s policies. “It is patently obvious,” he told the National Review, defending the “enormous diplomatic achievement” that he helped coin.

And Pompeo also challenged the Biden administration’s resolve toward China in recent appearances in Iowa and New Hampshire. He also took shots at the president for glancing at notes during his first formal press conference last week amid the seething coronavirus pandemic and crisis at the border.

It seems likely that Pompeo is trying to gain some early traction to carve a strong reputation ahead of the 2022 midterm elections, and his appearances in two early presidential nominating states clearly indicate his future interests in running for president in 2024.

“The key to understanding Mike Pompeo's behavior is not that he's a former secretary of state but that he's running for president—or trying to—in a very crowded field of Trump acolytes,” Thomas De Luca, a political science professor at Fordham University, said.

De Luca added that “Hillary Clinton also ran for president after being secretary of state but her former boss, President Obama, was still in office, she supported his foreign policy, and she was the clear favorite for the Democratic nomination and didn't need to distinguish herself from the pack with foreign policy bombast. Pompeo is desperately trying to stand out to win over Trump supporters, with criticism of China’s human-rights abuses coupled with studied indifference to human rights violations in Saudi Arabia, and criticism of Biden's handling of the border, coupled with silence on how Trump disabled the system of responsible border control.”

Pompeo, himself, has even hinted of a 2024 presidential run when he tweeted the number 1,327 earlier this month, which is the number of days until the next presidential election. He also told Fox News host Sean Hannity that he’s “always up for a good fight,” when asked whether he’s considering a presidential campaign. “I’ve been a part of the conservative movement for an awfully long time now. I aim to keep at it,” Pompeo said.

But experts suggest that Pompeo will face an uphill battle to rally support from both the Trump wing of the Republican Party and the more traditional wing.

“While Pompeo’s resume would seem like a good basis for a presidential campaign, I doubt he will succeed in uniting Trump Republicans with the party's traditional conservative base,” Gregory Koger, a political science professor at the University of Miami, said. “He simply lacks the charisma to attract supporters, relative to other strong candidates like Nikki Haley. And his tenure in the Trump administration brings with it responsibility for policy failures and it included personal criticism from Donald Trump.”

“He has one big problem—he lacks charisma, making his need to separate himself from the pack with rhetoric all the more essential,” De Luca said.

Recent polls have also indicated that Pompeo is trailing behind his presidential competitors in early nominating states like Iowa and New Hampshire.

“He hasn’t really struck a chord with, at this point, with the grassroots of the Republican Party, but of course this point is very early,” Galston said.

“Mr. Pompeo is aggressive and ambitious, and I am not at all surprised that he . . . is trying to emerge so quickly,” Galston said. “Among other things, I think he understands that he’s not exactly a household name with the Republican base, and he really has to . . . try to distinguish himself and try to make himself more visible.”

No announcement about a Republican presidential run has been made yet, but it’ll be important to watch how the game fizzles out, as there are nearly a dozen names being floated around.

“In early U.S. history, [secretary of state] was often a stepping stone for a presidential run—Thomas Jefferson, James Madison, John Monroe, John Q. Adams, Henry Clay, Martin Van Buren, all [secretaries of states] and then-presidential candidates,” Koger said. “I am intrigued that Pompeo would be the [second]—after Clinton—[secretary of state] to then run for president, possibly renewing the tradition.”