Is Mike Pompeo Really Running for President in 2024 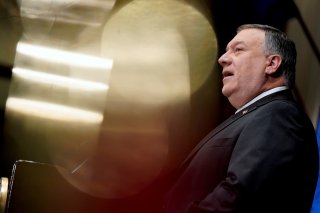 Yet another Republican presidential candidate has likely entered the political boxing ring Thursday, with a subtle, but powerful hook that’s an indicator of an upcoming competitive GOP match.

“1,384 days,” former Secretary of State Mike Pompeo tweeted Thursday, which is the current countdown until the next presidential election in November 2024.

The message ignited a swirl of speculation from social media users, as it was a clear tease of a 2024 White House bid. Fred Wellman, The Lincoln Project’s senior advisor for Veterans Affairs, dismissed the tweet, responding “This is just sad.”

Molly Jong-Fast, editor-at-large at the Daily Beast, also challenged Pompeo’s hinted tweet, replying, “You really do think you’re going to be president next, don’t you?”

Pompeo is just one of more than a dozen Republican lawmakers who are rumored to consider running to lead the party in 2024 and win back the commander-in-chief spot. Other contenders that are reportedly contemplating running are former Vice President Mike Pence, Donald Trump Jr., Sen. Ted Cruz (R-Texas) and former United Nations ambassador Nikki Haley.

Former President Donald Trump has also taunted a 2024 presidential run for a nonconsecutive term—but that’s only if Congress doesn’t disqualify him from the political playing field as part of his impeachment trial that’s expected in the upcoming weeks. As an ardent loyalist to the former president, Pompeo, along with other Trump-like candidates, will have a difficult time navigating the primaries if Trump does, in fact, ignite a 2024 campaign.

“Remember us,” Trump said upon leaving the White House this week. “We will be back in some form.”

If Pompeo decides to run for president, then he will likely face brutal intra-party competition, especially due to the GOP’s polarized climate post-Trump.

During the last year, Pompeo has spoken at several events, including at The Villages, an important stop in Florida for GOP politicians and candidates, at gatherings in both Texas and Iowa, and also made an appearance in Georgia to champion Trump’s efforts in tackling threats from China.

Before becoming the secretary of state, Pompeo served as the Central Intelligence Agency director under the Trump administration, as well as in the House for six years, representing Kansas.