Minnesota Governor Tim Walz May Be Sending Out ‘Walz Checks’ 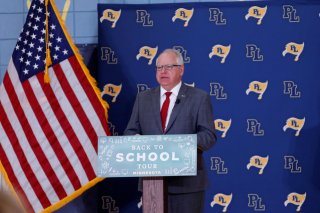 Stimulus checks from the federal government, which went out on three occasions during the first two years of the pandemic, appear to be a thing of the past. Following the $1,400 checks that were sent out in the spring and summer of 2021 as part of the American Rescue Plan Act, it became clear that there will be no further rounds of stimulus checks from the federal government.

However, some state and local governments have begun their own stimulus payment programs. Notably, California’s Golden Stimulus program was one of the first state-led stimulus initiatives.

“It’s about making sure we’re lifting up those who are hurt hardest during the pandemic, and it’s making sure that there’s a long-range vision about where Minnesota is going—and [the] world economy—and we are well-positioned to do that,” Walz said last week. Republicans, however, objected to the Democratic governor’s proposal, calling it an “election-year gimmick.”

Now, a follow-up report indicates that momentum is gathering for the proposal.

According to MinnPost, legislators appeared “warm to the idea” of those direct checks at the beginning of the legislative session.

“There’s a reason why we have a surplus,” Jeremy Miller, the state’s Senate Majority Leader, told MinnPost. “The state is collecting too much money from the taxpayers. So our focus is returning that money back to the taxpayers.” However, Miller continued to object to the idea of calling the payments “Walz Checks.”

Minnesota’s Democratic Speaker of the House, Melissa Hortman, also appears to have become less skeptical about the checks.

“I think it’s way too early to say how we give money back to Minnesotans. The House DFL is focused on workers and who needs the help the most,” Hortman said.

More than twenty years ago, another Minnesota governor, the former wrestler Jesse Ventura, used a budget surplus to send out direct checks. They were referred to at the time as “Jesse Checks,” MinnPost said, although Ventura did not create the name.

Both controversies recall the debate from 2020 over whether then-President Donald Trump’s name would appear on stimulus checks. ABC News obtained internal emails the following year that showed Treasury Department officials had instructed the IRS to include Trump’s name on the checks.

When additional checks were sent in 2021, President Biden’s name did not appear on them, although the president did send a letter to Americans letting them know about the imminent checks.