Mnuchin: ‘Now is Not the Time to Worry’ About U.S. Federal Deficit 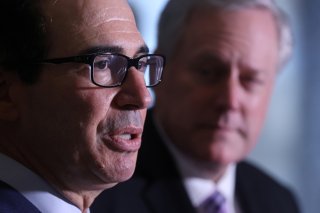 Treasury Secretary Steven Mnuchin warned the country to not fear the nation’s expanding federal deficit as the coronavirus pandemic has shattered economic stability.

The alarming federal deficit has been a top concern for Republican lawmakers, stalling the progress on the next coronavirus relief bill.

Mnuchin, along with White House chief of staff Mark Meadows—who’s balked at widespread federal spending on the next package—have led the administration’s coronavirus relief efforts with top Democrats, but they’ve failed to reach a deal as spending has centered as a main argument in the talks.

“I think both the monetary policy working with fiscal policy and what we were able to get done in an unprecedented way with Congress is the reason the economy is doing better,” Mnuchin said.

The federal deficit is expected to approach nearly $3.3 trillion when the fiscal year ends at the end of September, a figure that’s ballooned because of increased government spending to aid the coronavirus pandemic response to a plummeting economy.

Mnuchin’s comments come after Senate Majority Leader Mitch McConnell (R-Ky.) moved to push a “skinny” coronavirus relief package that capped spending at $500 billion, but the measure failed to pass as one Republican rejected the legislation and all Democratic lawmakers blocked it.

“The majority of Republicans are now no different than socialist Democrats when it comes to debt,” Sen. Rand Paul (R-Ky.) wrote on Twitter in July. “They simply don’t care about debt and are preparing to add at least another trillion dollars in debt this month, combined with the trillions from earlier this summer.”

Paul voted against the slimmed-down stimulus package that needed sixty votes to overcome a Democratic filibuster.

As Congress remains divided on the next stimulus plan, it’s likely that Americans won’t see additional coronavirus relief by the presidential election in November.

“I think there’s many areas of this where is an agreement between the Democrats and the Republicans, and some of the areas we do have differences on the amounts,” he said. “But I will continue to work on this: I’ve told the speaker I’m available any time to negotiate.”