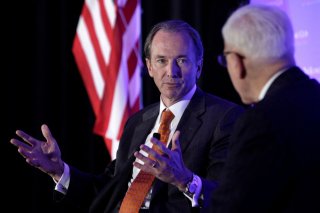 Morgan Stanley CEO James Gorman believes that there is a 50 percent chance the U.S. economy will be tipped into a recession, though any downturn is unlikely to be severe.

“It’s possible we go into recession, obviously, probably fifty-fifty odds now,” he said on Monday during a financial conference held by his New York-based bank, per CNBC.

“We’re unlikely at this stage to go into a deep or long recession,” he later added.

Gorman’s remarks come as the consumer price index (CPI) was found to have increased 8.6 percent in May from the same month a year ago, marking its fastest pace since December 1981, according to data the Bureau of Labor Statistics released on Friday. That figure was also up from April’s CPI reading, which was slightly below the previous forty-year high reached in March.

Despite the current economic backdrop, Gorman expressed confidence that the Federal Reserve will eventually be able to bring inflation down to more manageable levels.

“I don’t think we’re falling into some massive hole over the next few years, I think eventually the Fed will get hold of inflation,” he said.

“You know that it’s going to be bumpy; people’s 401(k) plans are going to be down this year,” he continued.

Signaling a more hawkish Fed, the Wall Street Journal reported on Monday that central bank policymakers are now entertaining the idea of a seventy-five-point hike to the Fed’s benchmark funds rate. Meanwhile, Goldman Sachs noted that it is adjusting its own expectation of a fifty basis point move to seventy-five.

“The most likely triggers for a shift to a more aggressive pace of tightening are the upside surprise in the May CPI report and the further rise last Friday in the Michigan consumer survey’s measures of long-term inflation expectations that has likely been driven in large part by further increases in gas prices,” Goldman Sachs chief economist Jan Hatzius wrote in a note.

“Friday’s strong CPI print that led to a surge in yields, along with the sell-off in crypto over the weekend, are weighing on investor sentiment and driving the market lower,” Kolanovic wrote in a note to clients. “However, we believe rates market repricing went too far and the Fed will surprise dovishly relative to what is now priced into the curve.”