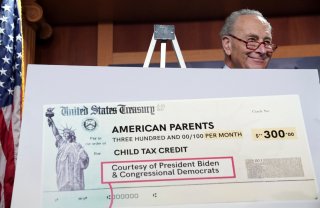 Not long after the expanded child tax credit was passed as part of the American Rescue Plan Act in the spring of 2021, Columbia University’s Center on Poverty and Social Policy published research showing that the credit made a difference in fighting child poverty.

October's payment, the research center said, kept 3.6 million children out of poverty that month, bringing child poverty down by 28 percent compared to what would have been expected without the credit.

However, the expanded child tax credit expired when the Build Back Better bill, which would have extended it by a year, died in the Senate in December. As a result, January and February passed without the payments going out. The Center on Poverty and Social Policy found that the number of children in poverty increased by 3.7 million in January 2022.

“A roundup of the available research reveals that, while in place, the monthly Child Tax Credit payments buffered family finances amidst the continuing pandemic, increased families’ abilities to meet their basic needs, reduced child poverty and food insufficiency, and had no discernable negative effects on parental employment," the Center said in the release of its January research.

In a new interview with Isaac Chotiner of the New Yorker, one of the authors of the report, Sophie Collier, detailed the findings and made the case for why the child tax credit could succeed in keeping families out of poverty.

While poverty figures are traditionally analyzed on an annual basis, the Center on Poverty and Social Policy analyzes them monthly instead. The studies use data from the Census Bureau’s Current Population Survey.

“Over the summer, with the initial payments, we saw an immediate reduction in the rate of child poverty, particularly because it was being paid out monthly for the first time and reaching about one in three children who were previously ineligible for the credit. So over the summer, you’re seeing both the initial payments being paid monthly for the first time but also a much greater share of the child population being eligible for the credit,” Collier said in the interview.

“January was the first month where families would not receive these monthly payments of either three hundred dollars or two hundred and fifty dollars per child, depending on age. So the exact reverse of what we saw over the summer happened, and we saw a spike in child poverty as a direct result.”

Collier added that while child poverty was lower than one would think in the early months of the pandemic—mostly because of pandemic-era government benefits—that’s largely a thing of the past.

“Before the pandemic, it was about fourteen percent. Now it’s higher than it was before the pandemic. All of the government support, in terms of what families were receiving to stabilize their incomes, is basically gone at this point, with maybe the exception of some continued expansions to food stamps. That’s the only piece of pandemic-related income support that is still being made,” she said.