Nikki Haley’s Campaign for the 2024 GOP Nomination Has Begun 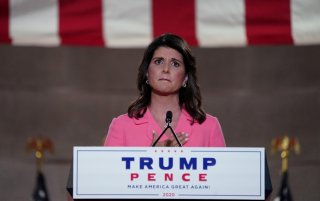 Former U.S. Ambassador to the United Nations Nikki Haley signaled her first sharp attempt to distance herself from former President Donald Trump in a new interview published Friday, a remarkable move as speculations have ramped up in recent months over her 2024 presidential hopes.

Perhaps this incarnation should not be surprising. The whiff of opportunism has always clung to Haley. She is in foreign policy a neoconservative in all but name. Though the media is portraying her as a former Trump loyalist, she always made it clear that she was holding her nose when she joined the administration. Her path is closer to that of other Trump administration officials who seized the chance to elevate their profiles by clambering on board, then voicing their distress after leaving. It just took Haley a little while longer. But now she has suddenly rediscovered the courage of her convictions, or so she would have it.

Haley’s comments are the most powerful yet against the former president, as she’s see-sawed between remaining as a close ally to Trump—considering he’s still the powerhouse of the GOP—while separating from him and his MAGA coalition to appeal to moderate and traditional Republicans.

“Nikki Haley's remarks are significant because she is an extremely credible candidate for 2024. I have always seen Haley as a candidate who has broad appeal within the Republican Party, because of her record as governor of South Carolina and as ambassador to the [United Nations] under Trump. She also has considerable appeal to moderates, and even some liberals,” Stephen Ansolabehere, government professor at Harvard University, said.

She also told the publication that she hasn’t spoken with Trump since the Capitol attack and expressed her anger over the president’s remarks he said at a rally prior to the assault, where he blasted former Vice President Mike Pence for his refusal to reject the certification of the 2020 electoral vote.

“When I tell you I’m angry, it’s an understatement,” Haley said. “I am so disappointed in the fact that [despite] the loyalty and friendship he had with Mike Pence, that he would do that to him. Like, I’m disgusted by it.”

The former South Carolina governor’s comments come as Trump’s legal team began to present its defense of the former president on Friday in his second Senate impeachment trial. The House voted to impeach Trump for his incitement of insurrection on the Capitol, arguing that his widespread claims of voter fraud during the recent election and encouragement for mob-like behavior during a rally earlier on Jan. 6 triggered his supporters to siege the building.

Although Haley did condemn the former president for his behavior, she told Politico that she thinks “impeachment is a waste of time.” At this point, a Trump conviction is very unlikely, as it would need a two-thirds vote in the chamber and several Senate Republicans have indicated that they plan to vote to acquit.

When asked how Trump should be held responsible, Haley said, “I think he's going to find himself further and further isolated.”

Haley—a potential member of the 2024 presidential shortlist—also predicted that Trump won’t seek federal office in the future since he’s “fallen so far.” But, she did note, “Nor do I think the Republican Party is going to go back to the way it was before Donald Trump. I don't think it should. I think what we need to do is take the good that he built, leave the bad that he did, and get back to a place where we can be a good, valuable, effective party.”

Experts, however, say that prospective GOP presidential candidates are “walking a tightrope right now” over whether to side with Trump.

“Any Republican elected official, and especially someone who intends to run for president in 2024, as Haley does, is walking a tightrope right now,” Marjorie R. Hershey, a professor emerita of political science at Indiana University-Bloomington, said. “It’s apparent that former President Trump tried to undermine our democratic system, so any Republican who defends him will look unworthy in the eyes of many Americans. But the minority of voters who favor Trump are very passionate people, so any Republican official who breaks with Trump will risk their hatred—and probably some death threats.”

Hershey added, “Haley seems to be trying to stay on the tightrope by criticizing Trump while also sounding like his friend and supporter. But the tightrope is very thin and keeps moving. The number of Republicans making a clear break with Trump will be a good indicator of how powerful they feel the remaining Trump base is within the GOP.”

Ansolabehere partially echoed Hershey’s remarks, noting, “The difficult situation for political leaders inside the party is whether to signal their support for Trump (and risk alienating those opposed to Trump), to signal their opposition to Trump (and risk alienating the Trump voters), or to stay silent. The big question is whether the Trump voters will remain connected to that label once Trump is off the ballot. The party risks alienating or losing many of those voters.  They may just sit out 2024.”

And some experts say that lawmakers seeking a 2024 White House bid and clash with the former president may deflect Trump-supporting voters.

“The former president mishandled the transition period and should have acted more responsibly in his public comments. That being said, taking on Trump right now doesn't seem like a sure fire way to get the Republican base to jump on your political bandwagon if you want to run for the White House. I don't anticipate very many conservatives joining Haley in bashing Trump. They want the Trump voter and the best way to get that is to show fidelity to the former President,” John Feehery, a Republican strategist and columnist at The Hill, said.

While it’s still not confirmed that Haley plans to run for president in 2024, her interview with Politico sent a strong message to the party about how she’ll operate on a potential campaign trail, maintaining an openness to disagreeing with Trump and his supporters.