No End in Sight: Gas Is Over $4 a Gallon in Every State 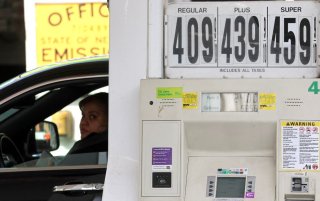 Much to the frustration of millions of American drivers, the pain at the pump continues with no end in sight.

The national average price for a gallon of gas is currently sitting at $4.58, according to AAA data—an eighteen-cent jump from a week ago and a forty-one-cent increase from when the national record was eclipsed in mid-March. As of Thursday, every state is averaging at least $4 a gallon.

“Those filling their tanks last week saw another jolt at the pump, as both gasoline and diesel prices continued their multi-week rally,” Patrick De Haan, head of petroleum analysis at GasBuddy, said in a release. Perhaps even more concerning is the fact that many experts are contending that prices at the pump will continue to trek higher.

“New records continued to be set on a near daily basis as the national average edges even closer to $4.50 per gallon. Prices later this week could be closer to $5 per gallon than $4, as demand continues to edge higher and inventories of both gasoline and diesel continue to decline, temperatures warm and motorists get back outside and we near the Memorial Day weekend, the start of the summer driving season,” De Haan added. “While the increases may start to slow in the days ahead as pump prices catch up to oil, there isn’t much reason to be optimistic that we’ll see a plunge any time soon,” he continued.

AAA spokesperson Andrew Gross echoed similar sentiments. “The high cost of oil, the key ingredient in gasoline, is driving these high pump prices for consumers,” he said in a statement. “Even the annual seasonal demand dip for gasoline during the lull between spring break and Memorial Day, which would normally help lower prices, is having no effect this year.”

Leo Waldenback, a co-founder of the online driver's education program Zutobi, told USA Today that “we have to accept that the gas prices are probably going to be high for a long time. It's definitely an extremely unique situation.”

Meanwhile, per CNN Business, JPMorgan analysts are now warning that California’s state average of $6 per gallon gas could quickly spread across the country. “There is a real risk the price could reach $6+ a gallon by August,” Natasha Kaneva, head of global oil and commodities research at JPMorgan, told the news outlet in an email.

Severin Borenstein, an energy economist at University of California Berkeley's Haas School of Business, acknowledged that a price drop won’t be coming soon, but he did point to one encouraging forecast. “The futures market is predicting that oil prices will decline by an amount that would translate to about 50 cents a gallon at the pump by the end of the year,” he told SFGATE. “It's a completely believable prediction, but not certain by any means. The price could drop more than that, or it could go up. I think the one thing people can count on is a lot of volatility,” he concluded.