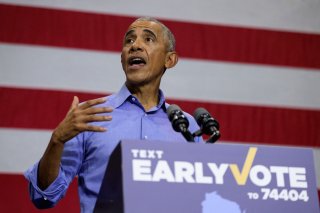 Throughout the campaign season this year, Democrats have frequently raised Social Security as a political issue and accused Republicans of wanting to cut the program.

One talking point frequently used in relation to the issue involves Sen. Ron Johnson (R-WI), who is running for re-election this fall, to move Social Security into the federal government’s discretionary budget, rather than fund it on its own as is currently the case.

“I’ve been saying for as long as I’ve been here that we should transfer everything, put everything on a budget so we have to consider it if every year. I’ve said that consistently, it’s nothing new,” Johnson said in a radio interview back in August. “I want to save it, I want to fix it. Right now we’re whistling past the graveyard.”

Obama then turned it back on Johnson.

“And if Ron Johnson does not understand that,” the former president added. “If he understands giving tax breaks for private planes more than he understands making sure that seniors who’ve worked all their lives are able to retire with dignity and respect—he’s not the person who’s thinking about you, and knows you, and sees you, and he should not be your senator from Wisconsin.”

Obama, in the same speech, addressed Republican messaging for the election in general.

“When gas prices go up, when grocery prices go up, that takes a bite out of people’s paycheck. That hurts,” he said. “But the question you should be asking is: Who’s going to do something about it? Republicans are having a field day running ads talking about it, but what is their actual solution to it?

“I’ll tell you,” he continued. “They want to gut Social Security, then Medicare, and then give some more tax breaks to the wealthy.”

The Hill wrote this week that “the fate of Social Security and Medicare is a midterm issue.”

“[They would] put us in default unless we yield to their demands to cut Social Security and Medicare. They’re so determined to cut Social Security and Medicare, they’re willing to take down the economy over it,” Biden said in a recent speech about a potential debt ceiling standoff, per The Hill. “There is nothing, nothing that will create more chaos or do more damage to the American economy than that happening if it were to happen.”