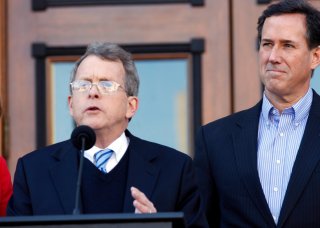 In the wake of a devastating mass shooting at a Texas elementary school that killed twenty-one people last month, Ohio Gov. Mike DeWine confirmed on Monday that he has signed a bill into law that makes it easier for teachers to legally carry guns in schools.

“Our goal is to continue to help our public and private schools get the tools they need to protect our children,” DeWine said during a news briefing on Monday, per NBC News.

“We have an obligation to do everything we can every single day to try and protect our kids,” he continued.

The Republican-backed bill, which was first introduced in February of last year, will vastly reduce the hours of training required for armed school personnel from 700 to just 24.

“Those seven hundred hours of training are intended to broadly train law enforcement,” DeWine said, per CNN. “The vast majority of that training is not really relevant to a school safety, directly.”

The Republican governor argued that examples of unnecessary training included patrolling in a police cruiser, stopping a vehicle, investigating a traffic accident, and operating a radar.

DeWine added that those individuals “authorized to carry guns in schools must have a criminal background check each year under the bill, and they’re required to take up to eight hours of requalification training.”

Meanwhile, teachers’ unions, the state’s Fraternal Order of Police, and gun safety groups expressed their opposition to the new legislation.

“In the wake of the tragic school shooting in Uvalde, Texas, Ohio lawmakers are rushing to take action to address school safety concerns in our state. The Ohio Education Association and the Ohio Federation of Teachers want to be clear: House Bill 99 will make Ohio’s students less safe in their schools,” Scott DiMauro, president of the Ohio Education Association, and Melissa Cropper, president of the Ohio Federation of Teachers, said in a joint statement.

“The safety of Ohio’s students and educators is our utmost priority, but we know putting more guns into school buildings in the hands of people who have woefully inadequate training—regardless of their intentions—is dangerous and irresponsible,” they continued.

DeWine’s signing of the bill comes as a bipartisan group of Senate negotiators on Sunday confirmed that they have reached an agreement on gun safety legislation. The proposal, which has not been written into legislative text, has garnered the support of at least twenty senators who worked closely over the past several weeks to find the areas of common ground on the highly contentious issue.

Notably, the announcement includes the support of ten Republican senators, which would give the proposal enough support to overcome a Senate filibuster.