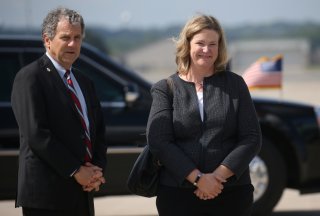 Three times since the start of the pandemic, the federal government sent stimulus checks to the majority of Americans. Two were sent during the Trump presidency, and a third went out early on in the Biden administration, although it’s been pretty clear for over a year that the federal government won’t be sending out any more such checks.

There are a few reasons for that, mostly because neither the White House nor leaders in Congress have much appetite for that sort of spending at this point, as they continue to be worried about inflation, with some economists blaming the early stimulus checks for the inflation that followed (others, meanwhile, have made the opposite case).

Some states have proposed statewide stimulus checks, child tax credits, and other payments that the federal government is no longer providing. Now, political candidates are beginning to propose such stimulus checks in the event that they’re elected.

Nan Whaley, the former mayor of Dayton who is running for governor of Ohio, announced Wednesday that she is proposing an “inflation stimulus check” for those who live in the state.

“Ohioans are seeing the cost of nearly everything increase—from record-high gas prices to increasing costs for groceries and other necessities like baby formula,” she stated, as reported by the Scioto Valley Guardian. “As Governor, I would fight to make Ohioans’ bills go down and their pay go up, and this inflation rebate is just the latest example of my plan to do just that.”

Whaley is the Democratic nominee for governor of Ohio this year and will face incumbent Republican Gov. Mike DeWine.

How much of a chance will Whaley have of winning and making the stimulus checks a reality? The Cook Political Report rates the Ohio race as “Likely R,” meaning the Republicans are likely to retain the seat. Indeed, Ohio has not elected a Democrat governor since 2006.

However, an analysis after the primaries by the Ohio Capital-Journal stated that Whaley “might actually have a shot in November.”

“It’s going to be a tall task,” David B. Cohen, a political scientist at the University of Akron’s Ray C. Bliss Institute of Applied Politics, said of the Democrats’ chances of knocking off DeWine.

“Without a doubt he’s vulnerable. And that vulnerability comes from a lack of enthusiasm among the Republican base,” Cohen added of the incumbent governor. DeWine faced primary opposition from multiple candidates who were unhappy with the restrictions DeWine put in place during the pandemic. President Trump was at times critical of DeWine, indicating possible trouble for the incumbent with the GOP base.