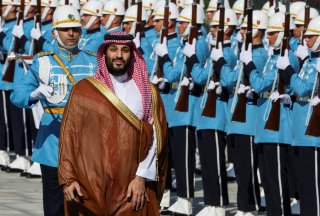 Following months of weekly decreases in gas prices, the average price has now risen for three straight weeks. And we have the OPEC+ oil cartel to thank for that.

According to GasBuddy, the average price in the United States is now $3.92 per gallon, a 13.8 percent increase from the week before. The average price has risen 22.5 cents from a month ago and 67 percent per gallon from a year ago.

“With OPEC+ deciding to cut oil production by two million barrels a day, we’ve seen oil prices surge 20%, which is the primary factor in the national average rising for the third straight week,” Patrick De Haan, head of petroleum analysis at GasBuddy, said in the site’s weekly report Monday. The move by OPEC+ sent the price of oil above $90 for the first time since the summer.

“Some of the refinery snags that have caused prices to surge in the West and Great Lakes appear to be improving, with prices in those two regions likely to inch down, even with OPEC’s decision, as the drop in wholesale prices has offset the rise due to the production cut. But where gas prices didn’t jump because of refinery issues, they will rise a total of 10-30 cents due to oil’s rise, and some areas are certainly seeing the jump already. For now, I don’t expect much improvement in prices for most of the country, with California and the Great Lakes as the exception, with downdrafts likely in the days and weeks ahead,” GasBuddy’s report added.

The most frequently encountered gas price was $3.29 per gallon, the same as last week, GasBuddy said.

The other weekly price report, from AAA, saw a twelve-cent week-over-week increase, taking the average to $3.91 a gallon. That report, too, attributed the increase to the OPEC+ action.

“Gas prices in California are finally cooling off, as more refineries come back online after undergoing maintenance and the switch to cheaper winter blends takes effect,” Andrew Gross, AAA’s spokesperson, said in that report. “High West Coast prices have played a major role in the recent climb in the national average for gas. Reversing this trend may help take some pressure off of pump prices.”

The OPEC+ move, per Reuters, is enough to get the Biden administration to rethink the U.S. relationship with Saudi Arabia.

“The President is disappointed by the shortsighted decision by OPEC+ to cut production quotas while the global economy is dealing with the continued negative impact of Putin’s invasion of Ukraine. At a time when maintaining a global supply of energy is of paramount importance, this decision will have the most negative impact on lower- and middle-income countries that are already reeling from elevated energy prices,” the White House said in a statement Monday.