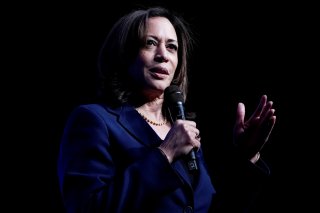 The news that presumptive Democratic nominee Joe Biden announced Kamala Harris as his running mate hit Vice President Mike Pence when he was heading to a campaign event in Arizona Tuesday.

“I don’t know if you all heard the news, but on the way here I heard Joe Biden just named his running mate—California Senator Kamala Harris. So let me take this opportunity to welcome her to the race,” Pence said at a launch event in Mesa for the “Latter-day Saints for Trump” coalition.

“As you all know, Joe Biden and the Democratic Party have been overtaken by the radical Left,” he said. “So, given their promises of higher taxes, open borders, socialized medicine, and abortion on demand, it's no surprise that he chose Senator Harris.”

Pence sent a brief “message” to his opponent: Congratulations, I'll see you in Salt Lake City.

Analysts and avid supporters of the Biden-Harris ticket think Pence will have a tough time on the debate stage, as Biden cited her “tenacity” and “fighting tooth and nail”—both serving as reasons for choosing her to help tackle the White House. Biden has personally experienced Harris’s power on the debate stage during Democratic primary debates, as he took jabs from the California Democrat.

“She will give Vice President Pence a very, very, very bad evening on that debate because she’s a great debater. She knows what she’s about,” Rev. Al Sharpton told MSNBC Tuesday. “I think Joe Biden could have chosen someone else, but he couldn’t have chose anyone better."

“If I were Donald Trump and Mr. Pence, I would be ready for a real battle now,” Sharpton added.

President Trump has already verbally pounced on Harris, dubbing her as a “phony” and claiming the Democratic ticket “embrace[s] the radical left.” In a coronavirus press briefing hosted after Biden’s announcement, Trump called Harris “nasty”—a term he also used to condemn Hillary Clinton in 2016.

“I’ve been watching her for a long time. I was a little surprised,” Trump said. “She was extraordinarily nasty to Judge Kavanaugh.”

“She was very, very nasty. She was probably nastier than even Pocahontas to Joe Biden,” Trump added, referring to Sen. Elizabeth Warren (D-Mass.), who was a contender on Biden’s shortlist of potential running mates.

Pence and Harris will battle head-to-head for the first time in a vice presidential debate on October 7 in Utah.