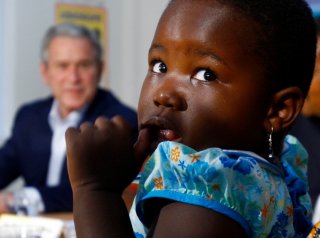 Unlike most other American presidents, George W. Bush is best remembered for his foreign policy initiatives rather than anything he ever accomplished here at home. Bush’s legacy has been reduced to unpopular neoconservative policies that some Americans believe represent a warmongering, America-last establishment. Of course, there is certainly truth to these sentiments given the current instability in the Middle East. But Bush’s legacy shines in one undervalued aspect: the President’s Emergency Plan for AIDS Relief, PEPFAR for short.

AIDS is an immunodeficiency disease that occurs at the late stage of an HIV (human immunodeficiency virus) infection. In the mid-1980s, the same decade HIV was discovered, AIDS began to spread quickly in generally poor countries in Africa, Latin America, and the Caribbean. While wealthier countries like the United States were quick to develop antiviral drugs and effective therapies against AIDS, discrepancies grew between North America and regions with low hygiene standards and limited access to pharmaceuticals. As a result, the United States was spending a measly $500 million per year to curb an epidemic that had already taken millions of lives. Then came PEPFAR.

Launched in 2003, PEPFAR is the United States’ global health effort to address an HIV/AIDS epidemic so desperately in need of foreign assistance. PEPFAR is a bipartisan effort that has lasted through four presidential administrations and symbolizes the power of a committed foreign assistance strategy. It’s led by the Department of State’s Office of the U.S. Global AIDS Coordinator and Health Diplomacy with seven federal agencies, including the Department of Labor, working together to eradicate the evil that is HIV/AIDS. PEPFAR focuses on thirteen African countries, all in sub-Saharan Africa, with multiple approaches. First, it expands HIV testing strategies to understand the most innovative testing methods, which includes self-testing. Second, PEPFAR partners with faith-based organizations and the private sector through partnerships like DREAMS (Determined, Resilient, Empowered, AIDS-free, Mentored, and Safe) that support caregiver programs, education subsidies, and gender violence prevention. Third and perhaps most importantly, PEPFAR emphasizes HIV prevention through, among other initiatives, encouraging male circumcision and making contraceptive healthcare widely available. Of course, this is far from an exhaustive list of PEPFAR’s strategies. Yet the very fact that PEPFAR has lasted almost twenty years is a testament to its renewed creativity. PEPFAR’s close monitoring of the HIV/AIDS situation in Africa demonstrates a willingness to adapt to challenging obstacles and view the disease through an economic, political, and cultural lens no other country has been able to.

As for what PEPFAR has achieved, that list is as long as it is underappreciated. The State Department estimates PEPFAR has saved 18 million lives, supported antiretroviral therapy for 15.7 million people, reduced HIV diagnoses in young females by 25 percent, provided care to 6.3 million orphans, and ensured voluntary circumcision for 22.8 million males.

The figure above shows the path to epidemic control in Swaziland, one of the thirteen “high-burdened” countries PEPFAR focuses on. Epidemiologists measure epidemic control as the number of new HIV infections compared to the total number of deaths from HIV-infected individuals. Epidemic control is reached when the first number falls below the second. As we observe in the graph, Swaziland saw a peak in infections (about 24,000) in 1996, after which it consistently dropped. Thanks to PEPFAR’s proliferation of antiretroviral therapy and public-private partnerships like DREAMS, Swaziland was able to achieve epidemic control ahead of schedule.

Swaziland is far from the only country that’s seen such progress. Since 2003, life expectancy in countries like Zimbabwe, Kenya, and Uganda has only been climbing up. It’s safe to say PEPFAR offers one of the biggest returns on investments of any U.S. program. Though it has already been two decades, PEPFAR’s achievements so far are only a fraction of what it will be capable of in the future.

Bush’s PEPFAR initiative must symbolize a renewed commitment to transparent foreign assistance for not only the Biden administration but future administrations. Polls consistently show Americans believe foreign aid makes up 25 percent of the federal budget. This is shamefully false: foreign aid makes up less than 1 percent, generally does not directly end up in the hands of dictators, and comes with stringent requirements. In 2023, President Joe Biden will oversee PEPFAR’s twentieth anniversary. But before then he must confront the many challenges PEPFAR faces including Covid-19 infections, vaccine rollouts, and political instability in Africa (especially Ethiopia, Eritrea, the Central African Republic, and Uganda). Foreign assistance has come under fire recently, with many believing the United States is wasting taxpayer dollars overseas. Those who view this spending as nothing more than pennies here having a disproportionately positive impact elsewhere willfully ignore American contributions to improved international welfare. Luckily, PEPFAR seems to have escaped these controversies. But President Biden must continue PEPFAR’s achievements if we are to recommit to strong U.S.-Africa relations. Too many Africans rely on American generosity for prevention and treatment programs to simply turn a blind eye.

For all of George W. Bush’s faults, PEPFAR stands out as an example of compassionate foreign policy both Republicans and Democrats should model when setting policy. With China tightening its grip on Africa and Latin America, there is no better time to ramp up long-time international programs. From $2.19 billion a year in 2004 to $6.9 billion in 2020, PEPFAR has come a long way since a life-changing conversation between Bush and First Lady Laura Bush. Some may believe Bush’s foreign relations to be irredeemable, undeserving of the slightest modicum of praise. However, PEPFAR shows a different story. George W. Bush is considered Africa’s favorite president as many remember the death sentence HIV used to equal in the 1980s and 1990s. A wonderful role model for all foreign assistance, PEPFAR has saved the lives of 18 million citizens so far in two decades. For the next two, let’s save 18 million more.

Sam Abodo is a researcher at Carnegie Mellon University focusing on the rise of terrorism through presidential administrations. Sam is also the chief political editor of the advocacy group Gen Z GOP, as well as the President of Carnegie Mellon’s public policy review The Triple Helix.