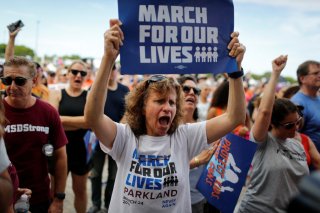 In the wake of recent high-profile mass shootings that have rattled the country, a new national poll released by Fox News is showing robust bipartisan support for an array of gun reform laws.

Conducted from June 10 to 13 with the participation of more than 1,000 registered voters nationwide, the survey revealed that 56 percent of respondents believe that having tougher gun laws would help reduce mass shootings in the United States. Additionally, voters are overwhelmingly in favor of requiring background checks to purchase a firearm, with 88 percent admitting that they support them. A sizeable 84 percent say they want to improve existing gun laws.

The poll’s results come as a bipartisan group of Senate negotiators confirmed they reached an agreement on gun safety legislation on Sunday. The proposal, which has not been written into legislative text, has garnered the support of at least twenty senators who worked closely over the past several weeks to find the areas of common ground on the highly contentious issue.

“Our plan increases needed mental health resources, improves school safety and support for students, and helps ensure dangerous criminals and those who are adjudicated as mentally ill can't purchase weapons,” the group said in a statement. “Most importantly, our plan saves lives while also protecting the constitutional rights of law-abiding Americans.”

On Tuesday, Senate Minority Leader Mitch McConnell (R-KY) threw his support behind the proposal, which would give the legislation at least sixty-one votes, one more than necessary to overcome a filibuster.

Per the Associated Press, McConnell said that the proposal “further demonstrates to the American people” that lawmakers can work together on significant issues “to make progress for the country.”

Senators and aides are expected to translate the agreement into legislation in days, in hopes that Congress could approve it before leaving for its Fourth of July recess. Both sides have acknowledged that the process could encounter disputes and delays.