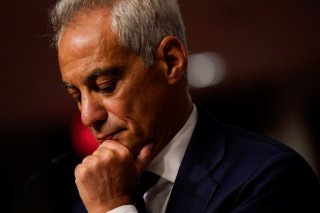 Rahm Emanuel’s confirmation hearing for his appointment as Ambassador to Japan, once regarded as a certainty, was thrown into disarray on Wednesday after progressive Democrats accused him of attempting to cover up the murder of Laquan McDonald, an unarmed black teenager, by a Chicago police officer.

The shooting, which took place in 2014 during Emanuel’s tenure as Mayor of Chicago, was initially reported as a justifiable shooting, as it was alleged that McDonald was carrying a knife and behaving erratically. Footage of the incident, taken from a police car’s dashboard camera, revealed instead that McDonald was unarmed and was walking away from the police when he was shot sixteen times in the back. After the footage was released, the police officer who had shot McDonald, Jason Van Dyke, was arrested and ultimately convicted of second-degree murder.

However, the city did not release the footage of the incident for more than a year, during which time Emanuel was successfully re-elected, leading to allegations that he had intentionally concealed the incident to avoid a political scandal.

Democrats on the Senate Foreign Relations Committee grilled Emanuel on this point on Wednesday, noting that the confirmation hearing was held on October 20, the seventh anniversary of McDonald’s death. Emanuel defended himself by arguing that he did not know the details of the shooting until the video was published. Some senators, including Jeff Merkley (D-OR), were skeptical, noting the close cooperation between the police and the mayor’s office during his stint in office.

A number of high-profile progressive members of the House of Representatives, including Rep. Alexandria Ocasio-Cortez (D-NY), have urged senators to vote against Emanuel’s confirmation, as has the National Association for the Advancement of Colored People (NAACP). However, most of the Senate’s more moderate Democrats, as well as some Republicans, have defended Emanuel and voiced their intent to confirm him. Sen. Tim Kaine (D-VA) described Emanuel’s service as mayor as “admirable,” and Sen. Bill Hagerty (R-TN) announced that he would also support him. White House Press Secretary Jen Psaki defended Emanuel’s qualifications at a Tuesday press briefing and indicated that he still held President Joe Biden’s confidence.

Emanuel, who served as Chief of Staff under President Barack Obama, was chosen for the position of U.S. ambassador to Japan because of his deep connections to the Biden administration. Owing to the importance of the U.S.-Japanese relationship, many U.S. ambassadors to Japan are high-profile political figures with ties to elected leadership, rather than career diplomats. Prior holders of the office include former Senate Majority Leader Mike Mansfield, former Vice President and Democratic presidential nominee Walter Mondale, and former Speaker of the House Tom Foley.