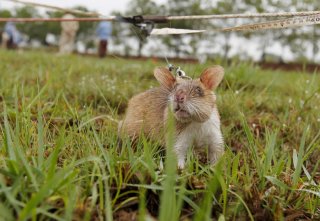 Editor’s note: Dr. Darcie DeAngelo is a medical anthropologist at the Institute for Genocide and Mass Atrocity Prevention (I-GMAP) at Binghamton University, State University of New York. In this interview, she explains the relationship between locals who live near minefields in Cambodia and the mine detectors, often former military combatants, who are viewed with suspicion because of divisions caused by the series of civil wars between the 1970s and 1990s.

Why are there so many unexploded bombs and minefields in Cambodia?

Cambodia is known for being the site of U.S. bomb droppings during the Vietnam War and for the Khmer Rouge genocidal regime, which also planted land mines from 1975 to 1979. Today a majority of Cambodia’s population is age 35 or younger, which means most of the population has grown up since the Khmer Rouge regime ended in 1979. This statistic fails to take into account the uneven distribution of the regime’s end in the country as fighting continued in the northwest of the country where the Vietnamese and their Cambodian allies fought to keep the Khmer Rouge army out of the country.

Most of the land mines in Cambodia were planted between 1985 and 1989, when the Vietnamese-allied government installed a “bamboo curtain” against the invading Thai and Khmer Rouge along the Thai-Cambodia border in the northwest. This area, called the K5 belt, remains the most densely land-mine-contaminated region of the world, a 1,046-kilometer (650-mile) strip of land with “up to 2,400 mines per linear kilometer.” Cambodia’s problem of millions of undetonated land mines makes it the country with the highest population of amputees in the world. On average it has 100 land mine accidents per year.

Why are the military and other de-mining organizations viewed with suspicion by the locals?

Land mine clearance requires a huge amount of military infrastructure. Decontamination, which is the term used for removal of land mines, depends on the same military skill sets that contamination depends on. So people who are de-miners are often soldiers or former combatants in Cambodia, and the divisions from the civil war still run deep. The largest de-mining organization in the country is part of the military branch of government.

The current Cambodian state has been running operations to clear the land mines since the 1990s, but the state is also rumored to grab village lands, disappear people who disagree with the ruling party, and quell legitimate protests, so de-miners carry a stigma of military corruption.

After war and mass atrocity, the state loses legitimacy. And so what happens is the villagers distrust even peacekeeping efforts, so even efforts to decontaminate the country result in a kind of mistrust. When you distrust the state, you need to build state legitimacy, and de-mining offers a real opportunity for states to do so. They can rehabilitate soldiers and build relationships between villagers and soldiers. But in Cambodia, I heard from villagers that they distrusted the de-miners and found them untrustworthy. They didn’t think that their land would be returned to them when the land mines were cleared, which causes some problems when it comes to information about where the land mines are.

How does mine clearing with rats work?

Rats are being used in de-mining because of their incredible sense of smell, relatively low cost of maintenance and ease of transport. Just like dogs, they don’t detect any false positives, as a metal detector would.

In the minefield, the rat is connected to two de-miners who walk on cleared corridors with the decontaminated area in between them. The de-miners step down the field in unison as the rat sniffs for mines in the pit, scratching twice when it smells TNT. Then the de-miner maps the location, and clicks a clicker, telling the rat it can go get its reward, a delicious banana.

The rats don’t get blown up by the mines because they’re so light. The rats each weigh 1 to 3 pounds, so they are weightless to a land mine, which usually requires a minimum of 11 to 35.3 pounds of pressure to activate.

How did the introduction of rats to de-mining change how it is viewed in Cambodia?

Rats have successfully been used to decontaminate Mozambique in Africa, and as for their import into Cambodia, the success story really lies in the fact that the organizations using them have been able to obtain donations and become independent so that they can work on demilitarizing the de-mining industry.

Rats don’t fit in with the military aesthetic of de-mining, unlike dogs, which are military aid animals and have been used within militaries for centuries. The image of a soldier proudly standing next to his dog is very different from a soldier cradling a small rat in his arms. So when the villagers first saw the rat, they were a little bit puzzled, but I actually think the rat humanized the de-miners in a way that demilitarized them. When they see the rat with a soldier, it’s more of this kind of absurdity. So it make them pause and think, “OK, what is a rat doing there?” Villagers have said in interviews that they wondered about it and it made them take a second glance. It undermines the kind of villainous characterization of the de-miners for the villagers.

APOPO, an organization that uses the rats in de-mining, posts publicity photos where the rats snuggle with their handlers. Since then the land mine detection dog organizations have started posting photos of their dogs being playful, and pictures of the puppies. So there is an effect which pervades other organizations, and demilitarization is seen as something to be valued, even in a highly militarized industry. These are opportunities for demilitarization of de-mining for the country itself, for the state and for people’s trust in authorities.