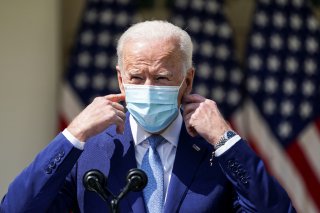 President Joe Biden tested positive for Covid-19 once again on Saturday morning, becoming the latest example of a rebound case after taking the Paxlovid treatment, according to the New York Times.

The seventy-nine-year-old Biden, however, is experiencing no new symptoms, the president’s physician, Dr. Kevin O’Connor, noted in a memo shared by the White House.

“The president has experienced no re-emergence of symptoms, and continues to feel quite well,” he continued. “This being the case, there is no reason to reinitiate treatment at this time, but we will obviously continue close observation.”

Biden, who is fully vaccinated and has received two booster shots of the Pfizer-BioNTech vaccine, tweeted that he would isolate “for the safety of everyone around me.”

“I’m still at work, and will be back on the road soon,” he added.

The White House also posted a video of Biden on the Truman Balcony with his dog Commander. “I’m feeling fine,” he said. “Everything’s good.”

The Times reported that Paxlovid rebound cases have become “a source of debate within the scientific community and among Covid patients.”

“Initial clinical studies of the drug, which is made by Pfizer, suggested that only about 1 percent to 2 percent of those treated with Paxlovid experienced symptoms again,” the Times continued.

However, a non-peer-reviewed study published in June showed that out of roughly 13,600 adult participants, about 5 percent tested positive for Covid again within thirty days and 6 percent experienced symptoms again.

“I think this was predictable,” Dr. Jonathan Reiner, a prominent cardiologist and professor of medicine and surgery at George Washington University Hospital, wrote on Twitter after the president’s positive test was disclosed.

He pointed out that “the prior data suggesting ‘rebound’ Paxlovid positivity in the low single digits is outdated” and that the real number was probably considerably higher.

Most medical experts, though, have stressed that Paxlovid has been highly successful in preventing more severe Covid-19 illnesses and hospitalizations.

“While we continue to monitor real-world data, we remain very confident in the treatment’s effectiveness at preventing severe outcomes from Covid-19,” Amy Rose, a Pfizer spokeswoman, said in a statement on Saturday.

Biden’s positive test comes as the highly transmissible Omicron BA.5 subvariant now accounts for more than 90 percent of current Covid cases in the United States, according to data released by the U.S. Centers for Disease Control and Prevention (CDC).

The Covid subvariant, which has shown to be particularly adept at evading the immune protection afforded either by vaccination or prior infection, has been driving a surge of new infections both in the United States and across the globe.