Secession Increasing in Popularity Among Biden and Trump Voters 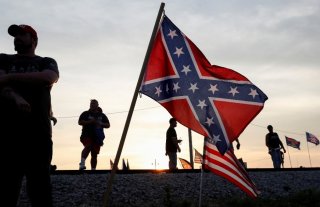 A poll released by the Center of Politics at the University of Virginia revealed that a majority of polled Trump voters—as well as a significant minority of polled Biden voters—were in favor of their state’s secession from the United States.

The report revealed that “Significant numbers of both Trump and Biden voters show a willingness to consider violating democratic tendencies and norms if needed to serve their priorities.”

Among its other conclusions, the report contended that:

-Around twenty percent of polled Trump and Biden supporters, with similar proportions for each, strongly agreed with the notion that the United States would be better off if the president “could take needed actions without being constrained by Congress or courts,” effectively turning the presidency into a four-year dictatorship.

-fifty-two percent of Trump voters, as well as forty-one percent of Biden voters, “somewhat agreed” or higher that the United States should be split, with either red or blue states seceding from the Union.

-More than sixty percent of both Trump and Biden voters contended that they viewed the United States as a government that was primarily rigged in favor of the wealthy, rather than a truly equal representative democracy.

-Two-thirds of both Trump and Biden voters suggested that strong leaders should be empowered to “take the law into their own hands” in dealing with political opposition deemed to be dangerous. One-third of polled respondents strongly agreed.

Overall, however, eighty percent of both Trump and Biden supporters agreed that democracy, however interpreted, was preferable to any alternative.

The Center for Politics highlighted the responses as evidence of a deep and growing cultural divide in the United States. The study claimed that it was targeted towards providing insight into the divide, as well as areas that could be bridged and “compromise receptive” Biden and Trump voters.

The poll was conducted in partnership with “Project Home Fire,” described as “a new initiative dedicated to finding common ground in American politics.”

“Our hope is that by employing the tools of modern behavioral science, [the project] can develop a deep, data-driven understanding of the fears and concerns animating the increasingly dangerous political and cultural divide in America,” said Robert “Mick” McWilliams of Project Home Fire. “The first step toward effectively solving a problem is to accurately understand its causes and we believe Project Home Fire can provide such understanding.”