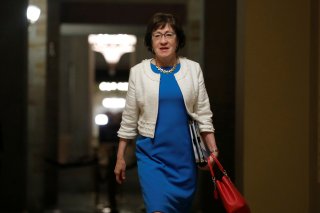 A bipartisan group of senators led by Sen. Susan Collins (R-ME) on Wednesday reached a deal to modernize the 135-year-old Electoral Count Act, making it more difficult to overturn a certified presidential election, the New York Times has reported.

The changes outlined in the new legislation aim to guarantee a peaceful transition of power, after the January 6 attack on the U.S. Capitol exposed how the current law could be manipulated to disrupt the process.

“One measure would make it more difficult for lawmakers to challenge a state’s electoral votes when Congress meets to count them,” the news outlet noted. “It would also clarify that the vice president has no discretion over the results, and it would set out the steps to begin a presidential transition.”

According to ABC News, the legislation would enshrine the vice president's “ministerial” role, rendering that individual powerless to alter the electoral count, raise the number of congressional objectors required to challenge a state's results to 20 percent, and dictate what would occur if an alternate slate of electors is presented to Congress.

Furthermore, the bill seeks to stop any state from sending a false slate of electors, which was part of a plan by Trump’s allies in 2020.

“We define who is the official at the state level for submitting the slate and that is the governor, unless the state law or state Constitution indicates otherwise,” Collins told reporters.

She added that the state “would not be able to change who submits the change [to Congress] after the election.”

The deal is the culmination of months of negotiations led by Collins and Sen. Joe Manchin (D-WV), along with an additional six Democrats and eight Republicans.

“From the beginning, our bipartisan group has shared a vision of drafting legislation to fix the flaws of the archaic and ambiguous Electoral Count Act of 1887,” the sixteen senators said in a joint statement.

“Through numerous meetings and debates among our colleagues as well as conversations with a wide variety of election experts and legal scholars, we have developed legislation that establishes clear guidelines for our system of certifying and counting electoral votes for President and Vice President. We urge our colleagues in both parties to support these simple, commonsense reforms,” they continued.

The Senate Rules Committee announced on Wednesday that the panel plans to hold a hearing on the Electoral Count Act and efforts to overhaul electoral laws in response to the January 6 attack. Sen. Amy Klobuchar (D-MN), the chairwoman of the committee, told CNN that the hearing will take place on August 3.