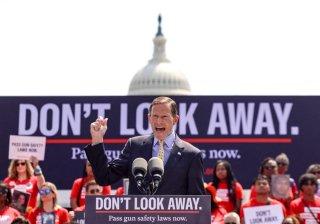 The vote tally signaled that the legislation will likely surpass the sixty-vote threshold needed to overcome a Senate filibuster later this week. Senate Majority Leader Chuck Schumer (D-NY), who praised the bill as “life-saving legislation,” said that he hopes to pass the bill this week before the chamber is scheduled to break for a two-week Fourth of July recess.

“Today, we finalized bipartisan, commonsense legislation to protect America’s children, keep our schools safe, and reduce the threat of violence across our country,” a bipartisan group of senators said in a joint statement, per NBC News.

“Our legislation will save lives and will not infringe on any law-abiding American’s Second Amendment rights. We look forward to earning broad, bipartisan support and passing our commonsense legislation into law,” they added.

Per Fox News, the eighty-page bill includes expanded background checks for gun buyers who are under twenty-one, provides grants for states that implement their own red flag laws, offers additional funding for both school safety measures and mental health services, creates penalties for straw purchases of firearms, requires more gun sellers to register as Federally Licensed Firearm Dealers, and closes the boyfriend loophole by prohibiting gun access for individuals convicted of domestic abuse against an intimate partner.

“Unless someone is convicted of domestic abuse under their state laws, their gun rights will not be impacted,” Sen. John Cornyn (R-TX) explained on the Senate floor. “Those who are convicted of non-spousal misdemeanor domestic abuse—not felony, but misdemeanor domestic violence—will have an opportunity after five years to have their Second Amendment rights restored. But they have to have a clean record,” he added.

Sen. Chris Murphy (D-CT) added that “this provision alone is going to save the lives of so many women who unfortunately die at the hands of a boyfriend or an ex-boyfriend who hunts them down with a firearm.”

The National Rifle Association quickly announced its opposition to the bill, contending in a statement that the legislation “does little to truly address violent crime while opening the door to unnecessary burdens on the exercise of Second Amendment freedom by law-abiding gun owners.”

Meanwhile, Senate Minority Leader Mitch McConnell (R-KY) issued a statement saying that he supports the bill, calling it “a commonsense package of popular steps that will help make these horrifying incidents less likely while fully upholding the Second Amendment rights of law-abiding citizens.”