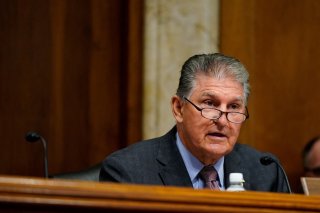 Sen. Joe Manchin (D-WV) on Sunday refused to take a stance about whether Democrats should retain control of Congress after this year’s highly anticipated November midterm elections.

“I’m going to work with whatever I have,” Manchin said on NBC’s Meet the Press.

“I think the Democrats have great candidates that are running. They’re good people I’ve worked with. I have a tremendous amount of respect and friendship with my Republican colleagues. So I can work on either side very easily,” he added.

When asked if he has a preference for the outcomes of the elections, Manchin responded by saying that he was comfortable with “whatever the voters choose.”

“I can’t decide what’s going to happen in Kansas or California or Texas. I really can’t,” Manchin continued.

“I’ve always taken the approach, ‘whoever you send me, that’s your representative, and I respect them.’ I respect the state for the people they send, and I give it my best to work with them, to do the best for my country. I don’t play the politics that way. I don’t like it that way. That’s not who I am.”

The conservative Democrat also touched on the prospects of the Inflation Reduction Act of 2022. This wide-ranging financial package includes more than $480 billion in new spending on energy, electric vehicle tax credits, and health insurance investments. The agreement is a compromise that contains elements of Biden’s contentious Build Back Better initiative.

The bill’s future, however, is still uncertain, mainly due to questions over Sen. Kyrsten Sinema’s (D-AZ) support.

“Sen. Sinema is my dear friend. We work very close together on so many things, and she has so much in this piece of legislation. She's formed quite a bit of and worked on it very hard. And with that, she's brought down drug prices, she's been very instrumental in letting Medicare go ahead and negotiate for lower drug prices,” Manchin said on CNN’s State of the Union on Sunday.

“I think that basically when she looks at the bill and sees the whole spectrum of what we're doing … hopefully she will be positive about it, but she'll make her decision and I respect that,” he continued.

Manchin also defended a provision in the bill that would impose a 15 percent minimum tax on corporations with profits of more than $1 billion. The legislation also aims to close the so-called carried interest loophole, which has long been a goal of Democratic tax reformers. It is a longstanding tax break that enables many private equity and hedge fund financiers to pay a lower capital gains tax rate on much of their income instead of the higher income tax rate paid by wage earners.

“People should be paying their fair share, especially the largest corporations in America that have a billion dollars of value or greater,” Manchin said. “Can't they pay at least 15 percent, so that we can move forward and be the leader of the world and the superpower that we are?”