Showdown: AOC vs. Chuck Schumer in the 2022 Primaries? 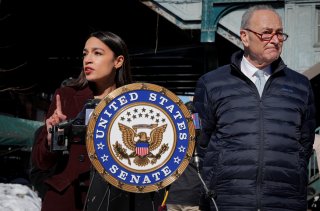 While Senate Majority Leader Chuck Schumer (D-N.Y.) whips up a coincidental, progressive quest for support ahead of a potential hurdle in the 2022 primaries, Rep. Alexandria Ocasio-Cortez (D-N.Y.) sits back in silence, seemingly swinging the mere threat of ousting his senate seat over his shoulders.

Chatter over a Schumer-Ocasio-Cortez primary battle has ballooned in recent months amid the majority leader’s efforts to flap his ideological wings to the far-left side of the Democratic party, but the two-term congresswoman and her team have remained hushed on the topic, offering little indication of Ocasio-Cortez’s political ambitions.

“I’m not playing coy or anything like that. I’m still very much in a place where I’m trying to decide what is the most effective thing I can do to help our Congress, our [political] process, and our country actually address the issues of climate change, health care, wage inequality, etc.,” Ocasio-Cortez told Punchbowl in an interview last month.

She has noted in previous interviews that the party “needs new leadership,” though denied that she’s best-suited for the job. “The House is extraordinarily complex, and I’m not ready. It can't be me. I know that I couldn't do that job.”

Despite Ocasio-Cortez’s attempts to avoid talks of a primary run against Schumer, multiple sources close to her said that she’s “seriously considering campaigning for the seat” but stands undecided.

Dubbed the “Wonder Woman of the Left, Wicked Witch of the Right,” Ocasio-Cortez has positioned herself in the national spotlight ever since unexpectedly kicking ten-term incumbent, Joe Crowley, from his seat in the 2018 midterm elections. The now thirty-one-year-old former bartender propelled conversations among 2020 presidential candidates about her Green New Deal, lobbied colleagues about lining up behind Medicare For All and tried to offer reforms for campaign-finance—efforts that are seeped into the next wave of Democratic representation. She’s also built a massive social media presence with more than 12.3 million Twitter followers—compared to Schumer’s 3.1 million—and has developed a unique intimacy with voters, using Instagram Live to cover questions ranging from the Jan. 6 attack on the Capitol to her cooking black-bean soup.

Given her soaring national profile, Ocasio-Cortez’s allies are confident she could raise up to $100 million if she ran for Schumer’s seat, as she raised $20 million during her own reelection campaign.

Her team could prop up at least a competitive run, so, what would make Ocasio-Cortez buckle up for a senatorial campaign?

“From reading and watching what Rep. Ocasio-Cortez and Schumer have both said, I would imagine that she would wait to see how Schumer works with the progressives with whom she is so popular—and how the [Democrats] work and what they put forward to move their agenda under Schumer and vis a vis Mitch McConnell and the Republicans in this session,” Jane Hall, an associate professor at American University’s School of Communication, said. “That pressure of a possible challenge may help move the ‘AOC wing’s’ agenda forward, [though] Schumer has to work with all the Democrats.”

Schumer, seventy, who has represented New York since before Ocasio-Cortez was born, recognizes the potential looming challenge, as his initiatives to throw his weight behind progressive demands are no coincidence.

“American politics is dominated by the two-party system and both sides face transformative yet divisive forces of change on the path to the 2022 mid-term election,” Dr. Ken Mitchell, professor and chair of the political science and sociology department at Monmouth University, said. “On the GOP side, whether Trump maintains his hold dominates all aspects of GOP activities—campaign fundraising, candidate selection for the mid-term, policy views, how to approach the Biden administration, etc. On the Democratic side, the elephant in the room is AOC’s potential primary challenge to Senator Schumer. Progressive activists want it after their 2020 disappointments.”

Mitchell added, “Let’s remember Biden flamed out in the early 2020 primaries. Underestimating the progressive wing of the Democratic party is ill-advised, especially in a midterm primary election where turnout and enthusiasm are crucial. If AOC were to win, knocking off the Senate’s majority leader, the Democratic party would be in uncharted waters.”

In recent months, Schumer has partnered with far-left members of his caucus including Sen. Elizabeth Warren (D-Mass.) to cancel up to $50,000 in student loan debt by executive order—efforts that the New Yorker didn’t get involved in until September, while colleagues like Sen. Bernie Sanders (I-Vt.) have chimed the rhetoric for years. Schumer also voted against the United-States-Mexico-Canada Agreement, expressed openness to scraping the filibuster and abandoned his bipartisan norms by pushing a sweeping $1.9 trillion stimulus package through a budget reconciliation process that wouldn’t need any Republican support—and that’s only a few of the progressive measures he’s taken ever since speculation over a 2022 primary challenge started to swirl.

“America needs bold change. We need immediate bold change,” Schumer told MSNBC last month. “We have Covid, the worst health care crisis in one hundred years since the Spanish pandemic flu, the worst economic crisis since the New Deal. So we have to act quickly.”

Although progressives understand that Schumer is not a politician like Sen. Joe Manchin (D-W.Va.), a moderate Democrat who is seen as a threat to preserving far-Left ideology, progressives will be monitoring his every move as majority leader, seeing if he can deliver on a massive stimulus package and create jobs to rescue the strained economy. And after all, progressives haven’t forgotten about his voting record of standing behind the Iraq War and repealing the Glass-Steagall Act.

“Every legislative or Biden administration compromise can be pinned on Schumer in a primary fight,” Mitchell said.

Now, far-left voters know Ocasio-Cortez needs to rally more support and engagement outside of New York City—the helm of the progressive movement—as grassroots organizations have advised her to develop a backing in more of upstate New York, a region that might be tough to grapple.

“Upstate NY will be difficult for her,” Leslie Feldman, a political science professor at Hofstra University, said. “A lot of more conservative voters to whom she might be too liberal.”

Ocasio-Cortez also can’t claim that Schumer is a creature to Washington politics—a tactic she used against Crowley—as the Brooklynite has maintained his well-known Sunday press conferences, lasering in on local, pressing issues and crafted a witty sense of humor, which is popular in the state.

Feldman noted, however, “[Ocasio-Cortez] has established herself as a star of the party,” and she has garnered support from highly populated regions including Manhattan, the Bronx and Queens.

Mitchell added, “Senator Schumer would start this race in the lead, no doubt. But could AOC win? Absolutely. First, U.S. politics are highly unstable right now so any number of unforeseen events could work against Schumer as the face of the establishment.”

“Second, AOC’s campaign war chest will be filled, important in the expensive New York media market. Third, while Washington, DC has a senate deadlocked 50-50 that empowers centrists such as Senator Manchin of West Virginia, the state of New York, and its voters, present a far more progressive environment,” he said.

But as Schumer flexes his ideological muscles to compromise with progressive caucus members, the next two years will determine whether he can convince the powerful “AOC wing” voters to back his reelection bid.

“[AOC] does what she wants when she wants. That’s what people admire about her, she’s got nothing to lose,” Feldman said. “Why would she run and attempt to steal Schumer’s seat? Because she can. Also, she follows the very good advice: never announce your plans.”