A Simple Majority is Enough to Make Puerto Rico a State 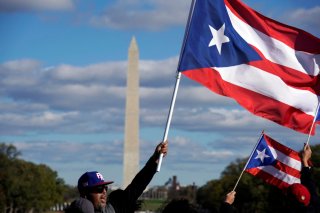 Although the U.S. citizens of Puerto Rico voted for statehood on November 3, 2020, we are seeing some elected officials like Senator Rick Scott make the argument that supermajority support is required before Congress admits Puerto Rico. However, a reading of the U.S. Constitution and study of American history shows that the 53 percent majority that voted for statehood is enough to make Puerto Rico a state.

Presidents are elected by a simple majority of the Electoral College. Voters first select electors via pluralities or majorities in their respective states, and then a simple majority of these elect the president. President Joe Biden recently won the 2020 presidential election with 51 percent of the popular vote and 57 percent of the Electoral College. In most states, pluralities are sufficient to elect governors, mayors, judges, and legislators.

Exceptions to majority rule are expressly stated. For example, both chambers of Congress must approve a constitutional amendment via a two-thirds vote, and then three-fourths of states must ratify the amendment. A two-thirds requirement also applies when Congress overrides a presidential veto, and when the Senate approves a foreign treaty or convicts and removes a federal officer.

As for statehood, Article V, Section 3 of the U.S. Constitution states that Congress has the power to “admit new states to the Union.” The Constitution does not list requirements for admitting states. Likewise, no law, regulation, or judicial precedent dictates how an admissions process should occur. As such, the American constitutional and legal system does not require supermajority support to admit new states.

Historical precedent also shows that Congress has not required statehood supermajorities of new states. Congress admitted states that did not hold statehood votes. The territorial legislatures of Alabama, Illinois, Indiana, Missouri, and Ohio merely requested statehood to Congress. Tennessee conducted a preference poll. California, Kansas, and Minnesota voted to ratify state constitutions, implying but not showcasing their preference for statehood.

Congress did not require a supermajority for any of the seventeen states that held statehood votes. Simple majorities sufficed for Alaska (61 percent), Florida (63 percent), Michigan (60 percent), and Washington (59 percent). Most tellingly, Congress nonetheless passed an enabling act for Wisconsin’s admission after 78 percent of voters rejected statehood.

A review of the U.S. Constitution and American history shows that a statehood supermajority requirement for Puerto Rico, or in any territory for that matter, is unprecedented. However, statehood opponents promulgate the requirement because it is a useful weapon for derailing the will of the people.

As with any delaying tactic, it is deployed by those who are losing a contest. Quoted in Breakthrough from Colonialism, the late Rafael Hernández Colón, a former governor of Puerto Rico and statehood opponent, once remarked that “Congress [would] act upon a statehood petition only when submitted by a clear majority and sustained over a period of time.” That day has arrived, as Puerto Ricans voted for statehood in 2012, 2017, and 2020.

Now, having lost at the polls, opponents hope to invalidate a popular mandate by establishing arbitrary goalposts, and moving them accordingly. Proponents demand “massive,” “overwhelming” or “substantial” support, but they do not specify a threshold that will suffice. The requirement is ambiguous and adaptable, and that is precisely its value. 75 percent could vote for statehood today and opponents will demand 90 percent tomorrow. It changes the conversation and delays.

Whatever the reasons for doing so, invoking the supermajority requirement for Puerto Rico statehood disrespects the will of American voters and the mandate they properly dictated at the polls. It is also legally, historically, and morally wrong.

The fact remains that the people of Puerto Rico exercised self-determination on November 3, 2020, and they chose statehood. Within our American system of government, their majority vote is enough to make Puerto Rico a state. That is why elected officials like Senator Rick Scott should support Senate Bill 780, the Puerto Rico Statehood Admission Act—the only bill regarding Puerto Rico’s status that respects the will of the Puerto Rican people.