Is Social Security on the Chopping Block? One Senator Says Yes 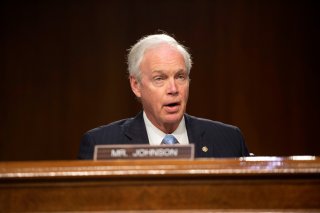 As Congress is weighing several bills that address the future of Social Security, one senator who is up for reelection this year made some eye-opening comments about the program.

According to the Milwaukee Journal-Sentinel, Sen. Ron Johnson (R-WI), said in an interview this week that Social Security and Medicare should be subject to annual budget deliberations. Johnson also suggested that the two entitlement programs should be made discretionary.

“Defense spending has always been discretionary," Johnson said on the radio program “Regular Joe Show,” as cited by the newspaper. “VA spending is discretionary. What's mandatory are things like Social Security and Medicare. If you qualify for the entitlement you just get it no matter what the cost. And our problem in this country is that more than 70 percent of our federal budget, of our federal spending, is all mandatory spending. It's on automatic pilot. It never...you just don't do proper oversight. You don't get in there and fix the programs going bankrupt. It's just on automatic pilot,” he stated.

"What we ought to be doing is we ought to turn everything into discretionary spending so that it's all evaluated so that we can fix problems or fix programs that are broken that are going to be going bankrupt,” Johnson added.

Johnson is running for a third term in the Senate this November. The comments were assailed by his likely opponent, Lt. Gov. Mandela Barnes, and White House Press Secretary Karine Jean-Pierre. “While @POTUS and congressional Democrats fight for the Inflation Reduction Act, which would let Medicare negotiate lower drug prices, congressional Republicans like @SenRonJohnson want to put Medicare on the chopping block,” the White House spokesperson said on Twitter.

Sen. Rick Scott (R-FL), the head of the Republican Senatorial Campaign Committee, introduced the 12-Point Plan to Rescue America earlier this year, a messaging document for the 2022 campaign. Scott’s plan was criticized for sunsetting all federal programs after five years, presumably including such entitlements as Social Security and Medicare.

“His big idea is to put Social Security on the chopping block every five years. That is: Every five years, Social Security, Medicare, and Medicaid have to be reauthorized or they go out of existence,” President Biden said in public comments about Scott’s plan last month.

“Social Security you paid in from the day you started working. It’s your other pension. You paid into it every single paycheck. You earned it. It’s your money, just like your pension,” the president continued. “And he adds in Medicare and Medicaid for the chopping block every five years. Unless Congress explicitly votes to extend those programs, they go away.”

Senate Minority Leader Mitch McConnell (R-KY) distanced himself from Scott’s plan, and it hasn’t been a prominent part of election messaging so far this cycle, with the exception of Democrats bringing it up to criticize Scott and other Republicans.

It’s likely that there is much public or political support for anything like Johnson proposed, in which there are no longer such guarantees in place of the benefits on which Americans have counted for decades. However, there are several different Social Security reform plans currently before Congress.

Rep. John Larson (D-CT) put forth the Social Security 2100: A Sacred Trust, which would extend the solvency of the program further into the future than its current date of 2034, after which the program will no longer be able to pay full benefits.

Another proposal is the Social Security Expansion Act, backed by Sen. Bernie Sanders (I-VT) and other progressive lawmakers, which its backers say will both raise benefits and keep the program solvent for 75 years.

There is also the Protecting and Preserving Social Security Act, recently introduced by Ted Deutch (D-FL) and Sen. Mazie K. Hirono (D-HI), which would both adjust COLA and extend the solvency of the program by seventeen years.

Also in late July, Rep. Rodney Davis (R-IL) and Rep. Abigail Spanberger (D-VA) introduced the Social Security Fairness Act of 2021, which would eliminate the Windfall Elimination Provision (WEP) and the Government Pension Offset (GPO), often referred to as Social Security’s “Evil Twins.” This bill is bipartisan and has over 290 sponsors.

Most of these bills are unlikely to pass during the remaining time in the current session, and none have been specifically singled out as priorities by the White House or leaders in Congress.

Social Security and its future haven’t been expected to serve as a major issue in the fall midterm campaigns either, but as long as politicians continue to imply that they plan to make it less secure, it may yet emerge as one.