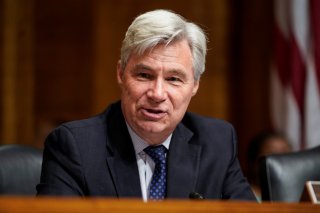 According to the senator’s press release, the bill would help borrowers pay down the principal on their federal loans more quickly and “ease a massive burden on tens of millions of people carrying student debt.”

“Big student loan interest payments can create a treadmill of debt that many Americans can’t escape,” Whitehouse said in a statement.

“Those interest payments often stand between borrowers and the financial freedom to focus on the future, whether it’s buying a home, saving for retirement, or investing in their children. This bill will help people pay off their loans more quickly and get on with their lives,” he continued.

According to data compiled by the Federal Reserve Bank of St. Louis, the nation’s student loan debt has surged in recent years, reaching roughly $1.75 trillion as of April. A NerdWallet study revealed that the average U.S. household with outstanding student debt owes more than $57,000 in loans.

Last month, in an effort to reduce that debt load, the Biden administration confirmed that it will wipe clean the federal student loan debts of about 200,000 borrowers who claimed in a class-action lawsuit that they were defrauded and misled by their schools. The Sweet v. Cardona settlement is expected to cancel a total of $6 billion in student loan debt.

Eileen Connor, the director of Harvard Law School’s Project on Predatory Student Lending, which brought the lawsuit, called the settlement a “momentous” agreement that “will deliver answers and certainty to borrowers who have fought long and hard for a fair resolution.”

President Joe Biden is also mulling whether to move ahead with broad-based student loan forgiveness. For months, lawmakers like Senate Majority Leader Chuck Schumer (D-NY) and Sen. Elizabeth Warren (D-MA) have urged Biden to sign off on canceling $50,000 of student loan debt per borrower. The president, however, has indicated that he likely won’t go higher than his campaign promise of $10,000 per borrower.

“I am considering dealing with some debt reduction,” Biden told reporters at the White House in May. “I am not considering $50,000 debt reduction. I am in the process of taking a hard look at whether or not there will be additional debt forgiveness and I will have an answer on that in the next couple of weeks,” he continued.