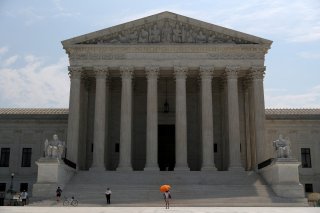 The unanimous decision comes after “faithless electors” in Washington and Colorado voted contrary to who they originally promised to support.

“State election laws evolved to reinforce that development, ensuring that a State’s electors would vote the same way as its citizens,” Justice Elena Kagan wrote for the court. “States listed only presidential candidates on the ballot, on the understanding that electors would do no more than vote for the winner.”

Kagan continued the court’s opinion by saying “electors are not free agents. They are to vote for the candidate whom the State’s voters have chosen.”

The decision could impact the upcoming presidential election as members of the Electoral College must comply with the popular vote.

A handful of Democratic electors attempted to deny Donald Trump’s presidency in 2016. Three members in Washington state voted for former Secretary of State Colin Powell, rather than the former Democratic presidential candidate Hillary Clinton, with hopes that colleagues would join them.

The efforts didn’t succeed and each elector was fined $1,000, prompting legal arguments about the constitutionality of restricting Electoral College votes.

In Colorado, an elector voted for former governor of Ohio John Kasich instead of Clinton. But, rather than receiving a fine, the elector was removed and replaced from office. After being removed from office, he filed suit and won in an appeals court since the state doesn’t possess the power to remove electors from office.

“The Constitution’s text and the nation’s history both support allowing a State to enforce an elector’s pledge to support his party’s nominee - and the state voters’ choice - for President,” Kagan wrote.

Thirty-two states, as well as the District of Columbia prohibit Electoral College members to support a candidate contrary to popular vote. However, fifteen states not only require electors to pledge to back the popular votes, but also will be fined or removed from office if the pledge is dishonored.

After hearing the court’s opinion, Lawrence Lessig, a Harvard Law professor familiar with the case, disagreed with the final decision.

“When we launched these cases, we did it because regardless of the outcome, it was critical to resolve this question before it created a constitutional crisis. We have achieved that. Obviously, we don’t believe the Court has interpreted the constitution correctly. But we are happy that we have achieved our primary objective - this uncertainty has been removed. That is progress,” Lessig, an open critic about the Electoral College political system, said.

Lessig took to Twitter about the decision, tweeting, “But I am very happy the question of whether electors are “electors” is now answered before it creates a crisis. Gratitude to all who helped.”

Kagan emphasized that electors “have no ground for reversing the vote of millions of its citizens” because “that direction accords with the constitution - as well as with the trust of a nation that here, We the People rule.”

Rachel Bucchino is a reporter at the National Interest and a former reporter at The Hill. Her work has appeared in The Washington Post, U.S. News & World Report and The Daily Record. Follow her on Twitter @BucchinoRachel