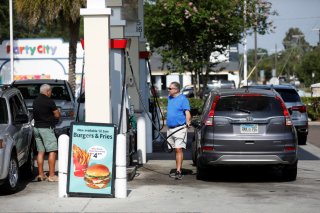 There’s no question that many Americans are struggling to come to terms with the soaring gas prices that have hovered around $4.30 per gallon for the past several days. With Americans taking such a financial hit just for filling up their vehicles with fuel, some are now wondering if Washington or states themselves will take meaningful action through tax breaks or some form of stimulus checks.

“The Biden administration has been aggressively exploring ways to make up for the loss of Russian oil imports, which the U.S. banned last week,” Yahoo News writes.

“With limited options for addressing the underlying supply issues, lawmakers have proposed a variety of potential ways to help Americans bear the burden of rising fuel costs,” it continues.

For example, Yahoo News noted that Maryland’s governor and state legislature have agreed to temporarily suspend state gas taxes, an idea that has been floated in several other states and also at the federal level.

In California, per NBC Bay Area, a group of lawmakers is expected to announce a proposed $400 gas rebate for every state taxpayer, whether or not they own a car. Those funds would come out of the state’s $9 billion budget surplus.

“Many Californians are feeling severe financial pain at the pump and looking to California’s leaders for help,” Assemblywoman Cottie Petrie-Norris (D-Irvine) said in a statement. “We believe a rebate is the best approach to directly put money in people’s pockets,” she continued.

Not to be outdone, some progressive Democrats have introduced a bill that would tax the biggest oil companies in order to fund quarterly direct payments, or stimulus checks, to Americans.

“The bigger thing is that it’s going to save everyone money,” said Rep. Ro Khanna of California, one of the bill’s main sponsors. “If you’re big oil, and you look at this, you’re not going to want to pay this tax, and so you’re going to be willing to lower prices.”

However, there are some who believe that totally eliminating gas taxes would only hinder the nation from reaching its long-term goals. “The federal gas tax is a critical, though increasingly weak, policy that Congress should bolster, not undermine,” wrote the Washington Post editorial board.

“Suspending the gas tax would be another step toward breaking the linkage between how much people use the roads and what they pay to maintain them. One side effect would be more driving—and more wear and tear on the nation’s infrastructure. Another would be more greenhouse gases in the atmosphere,” the editorial continued.