Threats of Violence Against Women in U.S. Politics Is a Growing Problem 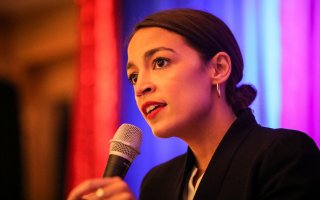 From plans to kidnap Gov. Gretchen Whitmer to Rep. Alexandria Ocasio-Cortez’s being called a “f—ing b—” by her colleague Rep. Ted Yoho, it’s been a nasty year for women in American politics.

Now, some women who’ve been targets of such misogyny want to put this problem on the congressional agenda.

On Sept. 24, House Democrats Rashida Tlaib, Ocasio-Cortez, Ilhan Omar, Ayanna Pressley and Jackie Speier introduced a resolution – a largely symbolic congressional statement that carries no legal weight but provides moral support on certain issues – recognizing violence against women in politics as a global phenomenon. House Resolution 1151, which is currently under consideration by the House Judiciary Committee, calls on the government to take steps to mitigate this violence in the United States and abroad.

Violence is often equated with physical injury, but in policy and academic research the term is defined more broadly to mean a violation of integrity. Violence is any act that harms a person’s autonomy, dignity, self-determination and value as a human being.

H.R. 1151 marks an important moment in American politics. As record numbers of American women are running for and winning public office, their growing political power has been met with death and rape threats, sexist abuse and disparagement – including by the president of the United States himself.

Such attacks undermine not only gender equality but hurt democracy itself, my research shows.

Tlaib was the first to enter the term “violence against women in politics” into the congressional record, with a one-minute floor speech in March. Calling it a “global problem,” she emphasized, “I also mean here in the United States. My family and I constantly face death threats and harassment.”

In July, after Rep. Yoho’s crude and sexist insult on the steps of the U.S. Capitol, Ocasio-Cortez also addressed gender-based violence in the House. In a widely reported speech, she said “this issue is not about one incident.”

Ocasio-Cortez described what happened to her as a “cultural” problem – one in which men feel entitled to “accost women without remorse and with a sense of impunity.”

Her remarks apparently resonated with many women on Capitol Hill. On July 22, the Democratic Women’s Caucus issued a statement declaring “foul and personal attacks meant to intimidate or silence women cannot be tolerated.”

The next month, more than 100 women lawmakers, including Democratic women in Congress and female parliamentarians from Germany, Pakistan, South Africa and beyond, sent a letter to Facebook urging the social media company to more quickly delete abusive and threatening posts against female candidates and remove digitally manipulated images – like “deepfake” videos of Nancy Pelosi – that spread disinformation about female politicians.

Shortly after, the anti-workplace-harassment group Time’s Up Now launched a new campaign, #WeHaveHerBack, calling on news media to avoid gender and racial stereotypes in covering female candidates during the 2020 election cycle.

That, in fact, is the goal of political violence. It seeks to exclude or suppress opposing political viewpoints through assaults on candidates and partisan voter intimidation.

Misogyny adds another level to political violence. As I explain in my new book, “Violence against Women in Politics,” sexist attacks against female politicians are not only driven by policy differences. They also question women’s rights, as women, to participate in the political process at all.

The most common form of violence against women in politics is psychological violence like death threats and online abuse, according to data from international organizations and scholars. But as the #MeToo movement has exposed, sexual violence is also a problem in U.S. state legislatures and elected assemblies around the world.

Actual physical violence against women in politics is rare, but it does occur.

The assassination of Brazilian city councilwoman Marielle Franco in 2018 and the attempted murder of U.S. Rep. Gabrielle Giffords in 2011 are examples. When targeting women of color like Franco, such attacks often reflect a combination of sexism and racism.

Costs to democracy and gender equality

Rep. Jackie Speier has called the violence she and her colleagues have experienced in Congress a form of “weaponized sexism.”

The perpetrators need not be men: Women themselves may internalize sexism – and racism – and deploy it against other women.

In September, Marjorie Taylor Greene, a Republican congressional candidate from Georgia, uploaded a threatening photo to Facebook in which she was holding a gun alongside images of Reps. Ocasio-Cortez, Omar and Tlaib, all women of color. Facebook soon removed the threatening image.

Violence should not be the cost of exercising women’s political rights, says Rep. Pressley.

“We have every right to do our jobs,” she said on Sept. 24, “and represent our communities without fearing for our safety.”