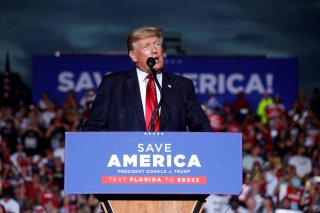 In the latest legal issue to befall former President Donald Trump, a federal grand jury in Washington is now examining his Save America PAC, which has been accused of misleading donors after Trump’s presidential election loss, according to a New York Times report.

According to subpoenas issued by the grand jury, the Justice Department is focused on the inner workings of Save America PAC, which was formed in the aftermath of the 2020 election and has raised tens of millions of dollars. Several other similar subpoenas were sent on Wednesday to junior and mid-level aides who worked in Trump’s presidential campaign, the newspaper added.

“The fact that federal prosecutors are now seeking information about the fundraising operation is a significant new turn in an already sprawling criminal investigation into the roles that Trump and some of his allies played in trying to overturn the election, an array of efforts that culminated with the mob attack on the Capitol on Jan. 6, 2021,” the Times wrote.

The new subpoenas were not clear regarding what possible crimes the Department of Justice might be investigating, though the House select committee probing the Capitol attack “has also been examining Trump’s fundraising operation and has raised questions about whether it had duped donors through misleading appeals about election fraud.”

“The new subpoenas appeared to have been issued by a different grand jury than the one that has been gathering evidence about the so-called fake electors plan, although the two grand juries seemed to be focused on some overlapping subjects,” the paper continued.

Officially registered with the Federal Election Commission in November 2020, Save America PAC “has been a key hub of an operation controlled by Trump’s team that has been the dominant force in Republican low-dollar fundraising,” the Times wrote. “Save America has shared only a small portion of its bounty with candidates in contested midterm races. Instead, it has hoarded cash or used it to pay firms and groups devoted to helping Trump, including his own businesses, or to undermining his enemies,” the report added.

A House select committee has already issued subpoenas for bank records and testimony and questioned Trump’s fundraisers. During a committee hearing in June, Rep. Zoe Lofgren (D-CA) offered the panel’s account of how Save America PAC and Trump’s campaign raised $250 million after the election loss via false claims that they were battling widespread fraud.

“Throughout the committee’s investigation, we found evidence that the Trump campaign and its surrogates misled donors as to where their funds would go and what they would be used for,” Lofgren said.

“So not only was there the big lie, there was the big rip-off,” she concluded, describing the fundraising efforts by Save America and other Trump-affiliated entities as “grift.”