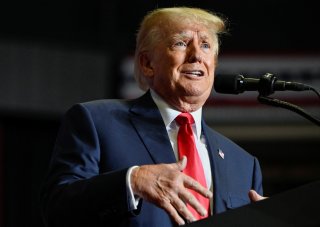 Soon after New York Attorney General Letitia James announced on Wednesday a lawsuit against former President Donald Trump, the Trump Organization, and three of his adult children, Trump slammed her investigation as a “witch hunt” on his social media platform Truth Social.

“Another Witch Hunt by a racist Attorney General, Letitia James, who failed in her run for Governor, getting almost zero support from the public, and now is doing poorly against Law & Order AG candidate, highly respected Michael Henry,” Trump wrote, per The Independent.

“I never thought this case would be brought—until I saw her really bad poll numbers. She is a fraud who campaigned on a ‘get Trump’ platform, despite the fact that the city is one of the crime and murder disasters of the world under her watch!” he continued.

In another post, Trump said: “Attorney General Letitia ‘Peekaboo’ James, a total crime fighting disaster in New York, is spending all of her time fighting for very powerful and well represented banks and insurance companies, who were fully paid, made a lot of money, and never had a complaint about me, instead of fighting murder and violent crime, which is killing New York State.”

“She is a failed A.G. whose lack of talent in the fight against crime is causing record numbers of people and companies to flee New York. Bye, bye!” he added.

The 220-page civil lawsuit filed in Manhattan Supreme Court seeks at least $250 million in damages for alleged widespread fraud involving years’ worth of false financial statements related to Trump’s businesses. The suit also aims to permanently ban Trump, Donald Trump Jr., Eric Trump, and Ivanka Trump from serving as an officer of a company in New York state, and permanently prohibit Trump’s companies from doing business in the state.

Furthermore, James confirmed that she asked federal prosecutors in Manhattan and the Internal Revenue Service to investigate Trump for possible federal crimes.

“For too long, powerful, wealthy people in this country have operated as if the rules do not apply to them,” James said in a statement.

“Donald Trump stands out as among the most egregious examples of this misconduct. With the help of his children and senior executives at the Trump Organization, Donald Trump falsely inflated his net worth by billions of dollars to unjustly enrich himself and cheat the system,” she continued.

“It’s hard for me not to conclude that this is a political hit job,” Barr said during an appearance on Fox News on Wednesday.

“I’m not even sure that she has a good case against Trump himself, but what ultimately persuades me that this is a political hit job is that she grossly overreaches when she tries to drag the children into this,” he added.