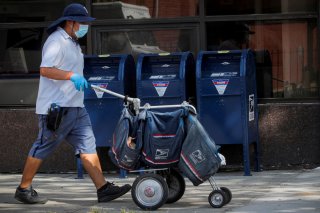 A Dallas postal worker has pled guilty to federal charges that he stole stimulus checks from the mail and sold the checks to others along his route.

According to local TV station WFAA, which obtained the associated court documents, the U.S. Postal Service employee carried out the thefts between March and May of 2021, when the stimulus checks from the American Rescue Plan Act were being distributed. The man, court documents say, took the checks both from his own route and from others.

The mailman, per the news report, “would drive on his route, he'd open the mail containing the stimulus checks and sell them to people, knowing the checks would be fraudulently deposited into banks.” The man also took photos of himself with the opened envelopes.

The worker, who worked for the Postal Service for about five years, has pled guilty and agreed to a prison sentence of up to five years and a fine of up to $250,000, according to WBAP and KLIF.

This is not the first case involving a postal worker stealing stimulus checks.

Last September, a former U.S. Postal Service worker in the Boston area was sentenced for stealing mail, including nearly $5,000 in stimulus payments, although she was accused of stealing much more than that in gift cards and other items. That woman received three months in prison and three years of supervised release after pleading guilty to a single count. She also agreed to pay $21,387 in restitution.

According to CBS News, a Chicago man in early 2021 was indicted on federal charges that he had conspired with his brother, a postal worker, to steal and sell stimulus checks. That man was charged with one count of conspiracy to steal mail and government funds, three counts of embezzlement of government property, and three counts of receipt of stolen mail in January 2021. The brother was charged separately.

That case involved CARES Act checks from the Trump administration and, per the Chicago Tribune, the man in the Chicago case referred to the checks as “Trump checks.” It’s not clear if that Chicago case has had any resolution.

Moreover, in late 2021, a twenty-nine-year-old U.S. Postal Service employee was arrested in New Jersey for stealing stimulus checks from his route. He also stole credit cards, which he allegedly used to make fraudulent purchases.

In many other cases, the Postal Service has played a role in investigating thefts of stimulus checks from the mail, even if the people accused were not themselves Postal Service employees.