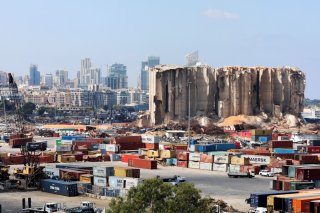 “We write to express deep concern about Lebanon’s worsening economic and political crises,” the letter read, “which are destabilizing the country and present clear risks to the broader region.” The letter “urge[d] prompt and significant U.S. actions” to “address the suffering of the Lebanese people and prevent Lebanon from economic collapse.”

The letter, which was signed by Meeks and a group of twenty-four other Democratic members of the House Foreign Affairs Committee, highlighted the danger posed by transnational crime networks and other threats, including Hezbollah, a Lebanese Shi’a militia-turned-political party that has often functioned as an extension of the government of Iran. It also warned that Russia and Iran might “leverage the fragmentation of the Lebanese state and society for their own gain.”

For this reason, Meeks and the other signatories suggested that Blinken pursue four steps, including the establishment of a financial assistance program for Lebanon’s next government, the setting aside of funds for the needs of vulnerable Lebanese, political assistance to ensure that Hezbollah remained excluded from the Lebanese military, and an independent UN-led investigation into the August 2020 explosion in the port of Beirut, Lebanon’s capital.

Once regarded as the most diverse and cosmopolitan country in the Middle East, Lebanon was gutted by a fifteen-year sectarian civil war from 1975 until 1990, variously involving Palestinian guerrillas, U.S. Marines, and the Israel Defense Forces (IDF). However, the root cause of the war, sectarian quotas in government, survived the war, and the division of government ministries among sectarian lines has led to expansive corruption and inefficiency.

A 2019 economic collapse after the failure of Lebanon’s banking sector led to unprecedented cross-sectarian protests, pressuring the government to reform and leading to the resignation of Lebanese Prime Minister Saad Hariri. The August 2020 explosion drew attention to the state’s dysfunction, prompting other states and international organizations to pledge support, but so far promised political changes have not been forthcoming.

The letter noted that Undersecretary of State David Hale had visited Lebanon in April and promised “America’s continued support for the Lebanese people,” urging that their proposals be considered to advance that support.