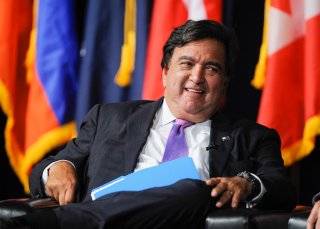 Former New Mexico Gov. Bill Richardson is hopeful that the United States and Russia will eventually sign off on a “two-for-two” prisoner swap that will get WNBA star Brittney Griner and former U.S. Marine Paul Whelan home.

“My view is optimistic, I think she's gonna be free. There's gonna be a prisoner swap—I think it's gonna be two-for-two. Can't forget about Paul Whelan,” Richardson, a former U.S. ambassador to the United Nations and energy secretary in the Clinton administration, told ABC News's This Week on Sunday.

U.S. secretary of state Antony Blinken acknowledged late last month that the United States presented a “substantial proposal” to Russia “weeks ago” for Griner and Whelan, two Americans who are classified as “wrongfully detained” by the Biden administration. Media outlets have reported that the United States has offered to exchange convicted Russian arms dealer Viktor Bout for Griner and Whelan. More recently, Moscow had tried to add convicted murderer Vadim Krasikov, who is currently imprisoned in Germany, to the proposed swap.

However, Richardson, who has previously helped return U.S. citizens imprisoned in Iran and North Korea, among others, said that he didn't fully agree with the Biden administration's strategy to get the two Americans back on U.S. soil.

“I wouldn't have gone public as much as they did,” he said.

Richardson described himself as a “catalyst” working on Griner's case, along with other detainees.

“I've been talking to the Russians. I talked to the White House,” he said without elaborating further.

Meanwhile, Trevor Reed, a former Marine who was released by Russia in April, told CNN over the weekend that Griner will experience “serious threats” to her health if she is sent to a labor camp. The two-time Olympic gold medalist was sentenced to nine and a half years in prison last week for bringing less than a gram of cannabis oil into the country.

“Anyone who is in a forced labor camp in Russia is obviously, you know, facing serious threats to their health because of malnutrition. There's little to no medical attention there whatsoever,” Reed said, adding that tuberculosis “runs rampant in Russian prisons” and there are “diseases that they have there in Russia which are largely extinct in the United States now.”