Want to Buy an Electric Vehicle? Good Luck Finding One 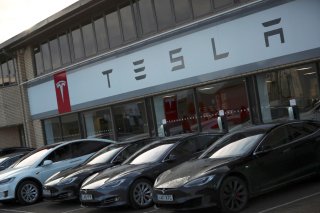 As the national average for a gallon of gas sits at $4.59, some Americans might be tempted to go all-in on an electric vehicle (EV) to save some of their hard-earned money at the pump.

However, as reported by CNBC, finding a new EV to purchase might be easier said than done.

“National inventory levels of vehicles—including EVs—were depleted during the pandemic by a combination of pent-up demand and supply chain problems,” the business news outlet writes. “Drivers looking to buy an EV today might have to wait for months, or more, before the cars are delivered.”

According to a recent Cox Automotive report, the nationwide supply of all new vehicles at the end of last month was down 40 percent from the same period last year, meaning that there were roughly 800,000 vehicles below supply in April 2021 and 2.2 million below 2020.

But this doesn’t mean that EV companies have stopped taking orders.

“Many of the newest EVs—including the Ford F-150 Lightning, GMC Hummer EV, Rivian R1T and Lucid Air—have backlogs of orders and reservations,” CNBC notes. “Even Tesla, the industry leader in EV sales, said some new orders won’t be fulfilled until the summer of next year, depending on the vehicle model.”

The report also pointed out that EV car buyers could have better luck if they focus on models from General Motors, Ford, Hyundai Motor, and Kia.

Still, despite the tight supply of available EVs, registrations for new EVs were found to have surged 60 percent in the first three months of this year, according to Automotive News.

Tesla vehicles had the most new EV registrations with 113,882, representing nearly 60 percent of EVs registered during that period. Kia was second with 8,450 registrations, followed by Ford with 7,407, and Hyundai with 6,964. EVs now account for an all-time high of 4.6 percent of the overall market.

Such EV numbers were indeed impressive, but senior autos reporter Pras Subramanian at Yahoo Finance contended that more headway needs to be made on infrastructure and affordability to make these vehicles even more mainstream.

“There needs to be more investment in the charging infrastructure here in the U.S. to limit concerns like range anxiety that plague many potential EV buyers,” he explains.