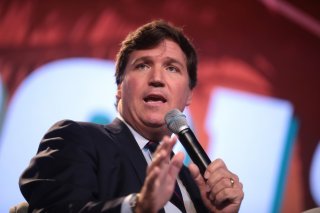 On Wednesday evening, Fox News host Tucker Carlson announced that the network would be airing a documentary on the January 6 attack on the U.S. Capitol Building.

A trailer for the documentary, entitled “Patriot Purge,” briefly outlined its content, arguing that the U.S. government had shifted its “war on terror” from Islamist terror groups abroad to right-wing groups in the United States. The trailer describes the government’s investigation into these groups as a “plot against the people” and claims that the Biden administration is attempting to criminalize dissenting views.

“The helicopters have left Afghanistan, and they’ve landed here at home,” Carlson claimed in a voiceover, suggesting that U.S. resources directed towards Afghanistan had been redeployed against American citizens.

The trailer’s release prompted immediate backlash online, and a number of observers highlighted factual inaccuracies it contained. One of the trailer’s interviewees dubiously suggested that conservatives had been imprisoned in America’s controversial Guantanamo Bay detention camp in southern Cuba. This is not true. According to the government, around forty prisoners remain in Guantanamo’s detention facility; none of them are U.S. citizens, although at least one U.S. citizen has been imprisoned in the camp in the past.

The trailer also featured a speaker who claimed that the January 6 incident was a “false flag” attack planned by government agencies to discredit the pro-Trump “Stop the Steal” movement seeking to overturn the results of the November 2020 election. This claim echoes a false theory popular in the aftermath of the attack that claimed it had been instigated by “Antifa” militants disguised as pro-Trump protesters.

In the aftermath of the Capitol riot, more than 650 attendees have been arrested and charged with illegally entering the building, although the FBI’s investigation remains open and it has continued to search for more attendees.

Democrats and moderate Republicans quickly condemned the documentary trailer, describing it as an incitement to violence.

“It appears that Fox News is giving Tucker Carlson a platform to spread the same type of lies that provoked violence on January 6,” Republican congresswoman Liz Cheney (R-WY), a prominent anti-Trump legislator and one of the two Republican members of the House Select Committee on the January 6 Attack, tweeted.

“Anyone working for Fox News must speak out. This is disgusting. It appears Fox News isn’t even pretending anymore,” Adam Kinzinger (R-IL), the other Republican committee member, wrote.

Some conservative sources, however, defended the trailer, insisting that government informants had infiltrated the preparations for the January 6 attack and had done nothing to prevent it.

Carlson claimed on Wednesday that he was “proud” of the documentary series, and described it as “the best thing we’ve ever done.”