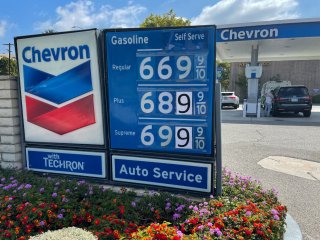 Even with gas prices still hovering around $5 per gallon on average, there hasn’t been a major pullback in driving among Americans, however, that could change in the coming weeks according to a new Dallas Fed analysis.

“U.S. consumers historically only slowly reduce fuel consumption as prices increase. This is primarily because most consumers must drive to work, school, grocery stores and other destinations every day,” Dallas Fed economist Garrett Golding wrote.

“Additionally, there are no scalable alternatives that can be immediately substituted. Using public transportation is an alternative mainly for those in dense urban areas, and buying a more fuel-efficient or electric vehicle at the first sign of higher pump prices is not an option for most,” he continued.

However, Golding cautioned that “fuel prices may be closer to consumers’ pain threshold than inflation-adjusted prices might suggest.”

And if gas prices continue their trek northward in the weeks ahead, “expect consumers to respond by cutting back on fuel consumption and overall spending sooner than later,” he concluded.

Natasha Kaneva, JPMorgan’s head of global commodities strategy, recently predicted that the national average for regular unleaded will hit  $6.20 per gallon by Labor Day. Similar calls have been made by other industry experts as well, including Tom Kloza, global head of energy analysis for the OPIS, which tracks gas prices for AAA.

The Fed analysis comes as President Joe Biden on Wednesday called on Congress to suspend federal gasoline and diesel taxes until the end of September in an effort to pass on cost savings to American consumers.

“By suspending the 18-cent gas tax, federal gas tax for the next ninety days, we can bring down the price of gas and give families just a little bit of relief,” Biden said in his speech from the White House.

“I fully understand that a gas tax holiday alone is not going to fix the problem, but it will provide families some immediate relief, just a little bit of breathing room as we continue working to bring down prices for the long haul,” he continued.

However, some economists have contended that the savings passed onto consumers would likely be minimal due to the fact that retailers could simply raise the base price of fuel to make up the difference.

“Whatever you thought of the merits of a gas tax holiday in February, it is a worse idea now,” Jason Furman, a senior economic official in Obama’s administration, wrote on Twitter.

“Refineries are even more constrained now so supply is nearly fully inelastic. Most of the 18.4 cent reduction would be pocketed by industry—with maybe a few cents passed on to consumers,” he concluded.