What Happens After the Coronavirus Peak? 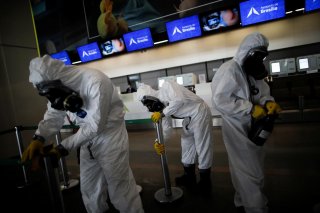 As Americans eye a return to normalcy in the wake of the first wave of the coronavirus pandemic, the great unknown is what happens once social distancing guidelines are relaxed.

Will the virus come roaring back once Americans resume shopping, eating at restaurants, vacationing and going back to work? What will day-to-day life look like in the coming months? And if another outbreak occurs later this year, will the economy shut down again?

Elected officials are in the precarious position of having to balance the need to protect the public from infection from the novel coronavirus while not completely shutting down the economy. More than 17 million Americans have already lost their jobs amid widespread business closures.

The consensus emerging among health experts is that states and cities will reopen in a tiered fashion depending on how prevalent the virus is within their jurisdictions.

And even when government-imposed restrictions are relaxed, a sizable proportion of the U.S.’s 320 million residents are likely to stay home or avoid unnecessary activities out of fear of becoming infected.

All the while, future outbreaks — and possibly another pandemic later this year — remain a strong possibility. Government health officials hope to have developed the capacity to conduct mass testing by then, as well as the ability to track and trace clusters of cases before they become outbreaks.

When will the country reopen?

The White House’s so-called “Stop the Spread” campaign ends on April 30, and President Donald Trump has indicated that he hopes to reopen the economy as soon as possible.

The White House campaign offered guidance to limit gatherings to 10 people or less and to avoid non-essential businesses, including restaurants and bars. Most states and nearly all major cities have heeded the guidelines, with most implementing strict stay-at-home orders of their own.

Dr. Jerome Adams, the U.S. surgeon general, said Friday that “some places will be able to think about opening” on May 1. “Most of the country will not, to be honest with you, but some will.”

Adams said officials intend to reopen the country “place by place, bit by bit, based on the data.”

“There’s no doubt that we have to reopen correctly. It’s going to be a step by step, gradual process. I think it would be community by community, county by county,” Centers for Disease Control and Prevention Director Robert Redfield said Monday.

Large cities and suburban areas are likely to have social distancing measures in place beyond May 1, whereas rural areas could see those restrictions relaxed.

Will coronavirus come back?

The virus, which originated from Wuhan, China, won’t disappear anytime soon, health experts caution. Countries around the globe will have to deal with outbreaks until scientists develop a safe and effective vaccine, which could be one to two years away.

As the U.S. moves through the first wave of the pandemic and as economic activity resumes, coronavirus is likely to start transmitting again.

Dr. Scott Gottlieb, the former commissioner of the Food and Drug Administration, said in a recent interview that he is concerned about a resurgence of the virus several months from now.

“I worry about the Fall,” Gottlieb said in a podcast interview on Friday.

Dr. Christopher Murray, whose pandemic models have been used by the White House, said Sunday that he is concerned that relaxing social distancing measures too soon could lead to a resurgence of coronavirus in July or August.

“If you open up too soon, and there’s a big load of cases still in the community that have a potential to go back to community transmission, we can quickly see resurgences in some states,” he said in an interview on CBS News.

“If you open up the entire country May 1st, you would very clearly have a rebound.”

“So by July or August we could be back in the same situation we are now.”

When will schools, restaurants and retail stores reopen?

Most states have shut down schools for the rest of the academic year. Dr. Anthony Fauci, the White House coronavirus task force’s leading expert on infectious disease, said on April 7 that he “fully” expects schools to reopen in the Fall.

The timeline of when retail businesses, restaurants and bars can reopen is one of the great unknowns of the pandemic. The leisure and hospitality industries have been among the hardest hit from the economic downturn.

When will concerts and sporting events resume?

Trump has said multiple times that he hopes professional sports leagues can resume their seasons in the near future. Nearly every major sports league has delayed or suspended operations during the pandemic.

NFL officials have said they are confident that the league will have a full schedule and that the season will begin on schedule on Sept. 10. Major League Baseball postponed its start date and has not announced plans for when the season will resume.

The Professional Golf Association delayed the Masters tournament from April 9 to Nov. 12. Other major golf tournaments have been delayed. The PGA Championship was postponed from May 14 to Aug. 6.

Even health experts predicting dire outcomes in terms of mortality from coronavirus acknowledge that the economy cannot remain locked down until the development of the vaccine.

“It’s untenable to do this again. We can’t go through this again as a country,” Gottlieb, the former FDA commissioner, said in the National Review podcast.

In order to balance those two competing interests, officials hope to have systems in place to test widely for coronavirus and to trace and track people who become infected.

Gottlieb, who has been a sort of informal adviser to the White House during the pandemic, has called for heavy investment in therapy drugs to treat people with coronavirus and antibody testing to determine who has already been infected.

The CDC has also advised the public to wear masks in public. Masks are not seen as a fool-proof guard against coronavirus transmission, but they do prevent the spread of large droplets from coughs and sneezes.

How will people respond even without official social distancing?

Even if the federal government and state governments relax social distancing guidelines, a large ratio of the population is likely to adhere to the guidelines on their own. People with higher risk for serious disease — the elderly and people with underlying health conditions — are more likely to stay home.

Gottlieb, the former FDA commissioner, said that this natural reluctance of many to return to business as usual will lead to what he calls “an 80% economy.”

“People will still be reluctant to crowd into stores, restaurants or arenas. Schools may remain closed. The public’s fears won’t relent simply because there are fewer new cases,” he wrote in a recent op-ed in The Wall Street Journal

“Some imagine that the coronavirus will run its tragic course in the spring, with the direst results avoided by intense social-distancing and other mitigation efforts, and then our lives can more or less return to normal in the summer,” Gottlieb wrote in the op-ed.

“But that isn’t realistic.”

Is coronavirus seasonal, and what does it mean if it is?

Experts are torn on whether coronavirus is seasonal. Fauci has said he believes it could be. Other epidemiologists have said it is difficult to say whether a new virus will follow a seasonable pattern, as does the flu.

A seasonal pattern to coronavirus would provide breathing room to health officials and the economy to start getting ahead of the virus. But it would still likely come back when temperatures cool.

How many people will become infected?

Projections of the number of cases and deaths from coronavirus have been all over the map, leading to widespread criticism of the models used to shape response to the pandemic.

A model from the Institute for Health Metrics and Evaluation (IHME), which the White House has relied on heavily, has projected between 60,000 and 90,000 deaths through Aug. 1.

He’s said in recent interviews that he expects around 1.6 million deaths from coronavirus in the United States. He’s based the analysis on the assumption that at least half the population will become infected with coronavirus, and 1% of patients will succumb to the illness.

What is herd immunity, and is it a viable option?

Herd immunity describes a point in a pandemic where enough people have been infected with a virus that it runs out of potential hosts and eventually dies out.

The United Kingdom flirted briefly with a herd immunity strategy, but changed course after health officials realized the toll that would take in terms of deaths in that country.

Sweden has embraced a strategy that is Europe’s closest to a herd immunity strategy. The Scandinavian country has not clamped down as hard on public gatherings and businesses as most other European countries have.