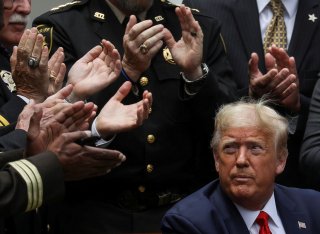 In the 1990s, amid concerns that the United States was facing a competitiveness deficit with other developed nations, education reform swept the country. Changes made in Texas under then-Gov. George W. Bush became a centerpiece of his 2000 presidential campaign and the No Child Left Behind Act. Similarly, following the murder of George Floyd, policing reform emerged as a top issue in the 2020 election—and now major reform legislation bearing Floyd’s name awaits action in Washington.

States from Colorado to Minnesota passed significant policing reform bills in 2020, but it remains on the 2021 to-do list for most city councils, state legislatures and Congress. Like education, law enforcement is primarily funded and governed at the state and local levels, but the similarities do not end there. While education reform remains a work in progress, the same concepts that have shaped its progress, including a drop-out rate that fell from 12.5 percent in 1991 to 5.3 percent in 2018, should guide policing reform: accountability, transparency, training, community engagement, and equity.

Accountability has been central to efforts to reshape education, including the development of metrics that are applied not just to help evaluate individual teachers and principals, but also to assess the performance of schools and districts. In the context of policing, the public also needs benchmarks—for cops, police chiefs and departments. Many indicators are required, including both data collection and in-person evaluations, but measuring crime rates, like student learning, is a core piece of the puzzle.

Although institutions other than schools and police—most notably families—affect both achievement and crime rates, we must reject the deterministic notions that there is any student who cannot learn or any person predestined to a life of crime. Indeed, the most effective approaches to dealing with “at-risk” youths as well as those already involved in the justice system recognize that identifying and building on strengths is as important as mitigating risk factors.

While tracking crime rates is elementary, policing performance measures should also include barometers such as public trust. The Chicago Police Department, for instance, now reports measures of trust by district in an online dashboard, as well as data on the percentage of serious crimes solved, number of wrongful arrests, number of verified complaints of officer misconduct and percentage of serious crimes reported to the police. The February Council on Criminal Justice report Policing by the Numbers reveals national trends in some of these areas, showing, for instance, that there has been a distressing decline in the share of crimes reported to police since 2010. It is a worrisome sign when victims opt-out of the justice system, just as it is when students drop out of school.

At the individual level, both in education and policing, accountability must also entail the ability to discipline and remove poor performers who have not responded to feedback and training. In both contexts, this is complicated by collective bargaining agreements, though in some school districts it is at least feasible to terminate failing teachers. Even when police chiefs can dismiss officers, they are often reinstated through an opaque arbitration process. Also, in some jurisdictions, police receive protections from a criminal investigation that no other citizen enjoys. One example is San Antonio’s collective bargaining agreement for police, under which an officer cannot be questioned until forty-eight hours after an incident and cannot be disciplined more than six months after the incident.

Just as teachers who are terminated may be hired at another school that is unaware of their poor performance or even misconduct, an analysis of data on police decertification shows that this practice is pervasive in policing. Accordingly, the report rightly recommends national standards for decertification coupled with a searchable database of decertified officers.

Transparency has also been a major component of education reform. Parents understandably want to know how their kids’ schools are performing, and often check online for a school’s rating based on academic and disciplinary data before deciding to move into a nearby home. Data on the performance of police departments should be similarly available, and that transparency should extend to policy development.

In education, school boards regularly solicit public comment, and the rules governing how districts and schools operate are typically set forth in publicly accessible handbooks and student conduct policies. Police agencies should operate similarly. Unfortunately, a Policing Project study found that more than half of the two hundred largest police departments do not publicly post their manuals, which are the comparable documents that set forth the agency’s policies. Although very few meet all transparency criteria, such as having manuals that are searchable, there are exceptions, such as Tucson, Kansas City, Salt Lake City, and Memphis.

Training is critical for both teachers and cops. States are rightfully strengthening their initial law enforcement officer training and certification requirements, but ongoing training is essential too, as lessons must be reinforced and knowledge and best practices evolve. While teachers spend about 10 percent of their school year in professional development, the continuing or in-service annual training requirements for police are often meager. It’s just ten hours in Florida and twelve hours in New Hampshire.

Community engagement is another area in which policing can take a page from education policy. There is a strong connection between parental involvement and student performance—even the existence of parent-teacher associations has been correlated with student achievement. Likewise, evidence indicates that meaningful police conversations and activities with community members contribute to public safety and legitimacy, particularly when social interactions are coupled with meaningful input on policing practices. A 2019 study in New Haven, CT, for example, found that increased interactions with police that were in a positive context led to higher levels of community trust and a greater willingness to cooperate in solving crimes.

Finally, tackling disparities in educational outcomes by characteristics such as race and disability has been a core, albeit unfinished, goal of education reform, and equity must also animate policing reform. In a speech to the NAACP, former President George W. Bush decried the “soft bigotry of low expectations.” Just as no student should be limited by stereotypes, every American should be entitled to a bias-free justice system.

Yet, research shows that people of color, especially Black men, and in particular tall Black men, are more likely to be stopped by police but less likely to be found with contraband. Despite such findings, most states do not require data collection on traffic or pedestrian stops, including the reason for the stop, the person’s race, and whether and why there was police use of force.

Students of color are more likely to come to school with challenges ranging from poverty and hunger to speaking English as a second language, but the onus is on schools to adapt their instructional methods to meet all students where they are. Likewise, not only should police track and report data on racial profiling, their policies and training must equip them to account for the individualized factors that shape their interactions with suspects, victims, and witnesses, which can include a trust deficit in some communities, language barriers, and mental and physical disabilities.

While education systems worldwide have been upended by the coronavirus and the United States still trails many key competitors in student achievement levels, there is considerable evidence that decades of education reform have paid real dividends. The number of American eighth-graders proficient in math, for example, more than doubled from 1990 to 2019.

From a global perspective, the improved performance of American students in science in recent years on an international exam while other OECD countries have slightly declined indicates that educational gaps are not preordained. Similarly, we need not accept a rate of civilians fatally shot by police that is more than sixty times that of England and Wales.

Fortunately, today’s levels of grassroots and philanthropic engagement around policing reform have begun to match those that drove decades of progress on education. Policymakers must leverage this historic moment to follow through on evidence-based policing improvements anchored in the same principles that helped drive changes in our schools.

The lesson is clear: to keep Americans safe and restore public trust, policing must be reinvigorated with a higher degree of accountability, transparency, training, community engagement, and equity.

Marc Levin, Esq. is Chief Policy Counsel at the Council on Criminal Justice. He can be reached at [email protected] and on Twittter at @marcalevin.